The Southwest Collection’s blog, Tumblr, and Facebook have been around for a full 2 years now. Thousands of blog visitors later (not to mention 8,500 Tumblr followers! Thank you all!) we are still going strong. It’s an honor (and really, really fun) to share all sorts of oddities from our interesting collections. To celebrate this accomplishment (and to give us time to dig up more cool stuff…) for the next two weeks (June 8 through June 19) we’re going to be sharing one highlight per day from our last year of entertaining you. There’s some good stuff, from parakeet-powered cars to Texas Tech football victories, maps of Snake Country to the itinerant toy tractors that roam our archival stacks (and every other place they can devise that might annoy us.)

Thanks for all your support! And don’t hesitate to click around through all our images weeks, months, and years to see if there’s something in there that enlightens you. Or, more likely, holds your interest long enough to look it over. That’s why we do this!

In the spring of 1864, during the U.S. Civil War, Union forces under General Ulysses S Grant in the East and General William T. Sherman in the West began a coordinated campaign against the Confederacy. Now, 150 years later, we’d like to share some of the accounts of this, and other campaigns, written by Confederate veterans decades later when they began joining various Confederate Veterans organizations. The records we hold can be found primarily among our United Confederate (Civil War) Collection (UCV), which documents the history of Fort Worth’s UCV branch, the Robert E. Lee Camp No. 158.

The well-weathered item above is one of the dozen or so Century War Books in the UCV papers. It was published in 1894, at about the time R. E. Lee Camp 158 was gathering stories such as B. S. Landon’s (see below.) According to its authors, the Century War Book was “issued with the idea of bringing its picturesque features before a larger body of readers” than its predecessors. The mammoth volume that collected all of what would become the Century War Books, as well as THE CENTURY MAGAZINE. Altogether, the entire cost of the history in all its forms reached nearly $250,000.

“Descriptive Lists” are the handwritten accounts of war service that veterans submitted to the UCV. This one was written by B. S. Landon, a Confederate cavalryman under J.E.B. Stuart in the Army of Northern Virginia. “I was never in any regular battles or engagements,” he claims, but that wasn’t entirely true. He “rec’d during the war two balls through the body–one through the leg & one in the bottom of the left foot,” which no doubt kept him out of action for a time. But not forever: Landon was shot 3 additional times before the end of the war. 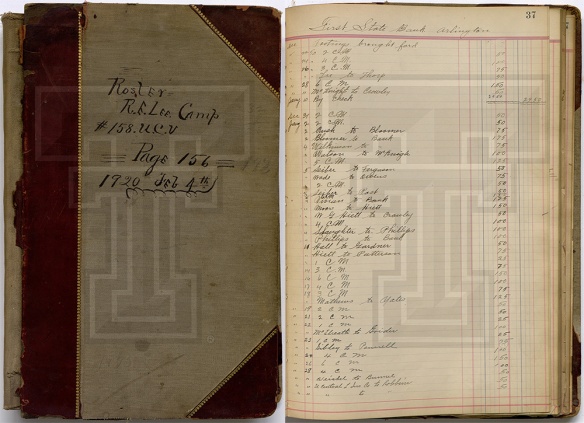 E. Lee Camp 158 had a large membership, as this roster can testify. Created by compiling the information gathered from hundreds and hundreds of Descriptive Lists, its pages aren’t as lively as veterans’ personal stories, but are equally useful because they gather members’ names in one place. To find a veteran they want to research, a researcher can avoid poring over pages and pages of Descriptive Lists and instead easily flip through this ledger. Names are most commonly found in the lists of those who paid their annual dues, as you can see in the page above.

The final item we’ve got for you today is the Descriptive List of Pvt. W. C. Allen of the Army of Northern Virginia. Whereas B. S. Landon’s story was modest, W. C. Allen’s is an unpunctuated, brutally matter-of-fact account of a Private’s life. Once war erupted in April 1861, Allen wasted no time enlisting. He was present at the Battle of Bull Run, Fredericksburg, and a host of others such as Sharpsburg where he was shot and left on the battlefield for 3 days while his wound “got full of worms.” After a surprisingly quick recovery, he went on to fight a bit more before he was captured. Released 22 months later, he was apprehended again after rejoining the Confederate army, put on trial for “bushwhacking,” jailed in Chattanooga, Tennessee, and then incarcerated in the “Penatenchury” in Nashville until April 1865. We’ve read a lot of these letters, and most of us agree that there are few stories to match Allen’s.

The entirety of this collection has been digitized and placed online, but if you’d like to see these incredible items with your own eyes then don’t hesitate to contact our Reference Staff who are always happy to make that happen.