Did you know that the Southwest Collection has over 130,000 newspapers available among our digital collections? This massive collection represents several years of digitizing newspapers from throughout West Texas and, in some cases, volumes from other parts of the United States. Many of the earliest volumes date from January 1920, so we’ve dug into issues from that month to share with you their very urgent news.

Our first paper is The Ranger Times, above, which chronicled the community of Ranger, Texas, in Eastland County. This issue comes from New Years Day, 1920, when Cuban sugar was on everyone’s mind, with a little Soviet Russia and Dallas murder thrown in.

The Spearman Reporter was first published in 1919 when the newspaper was transferred from the neighboring town of Hansford, Texas. The newspaper typically covered events in Hansford County and Spearman, although it also threw in some news from the surrounding region. January 9, 1920’s was no exception. All that being said, the best part of old newspapers are usually the ads. Check out that Edison Diamond Disc!

The Gorman Progress was the weekly newspaper for Gorman, Texas, in Eastland County. The newspaper saw publication from 1901 to 2014. These pages date from its earliest printings. Our biggest regret is that because this copy was damaged before we received it, we now can’t quite figure out what’s going on the cartoon on the lower left.

Ozona, Texas, and Crockett County saw their lives chronicled in The Ozona Stockman. The newspaper dates back to the late-1800s when it was titled the Ozona Kicker. It bore the names Courier and the Ozona Enterprise as well before obtaining its current title in 1914. And this New Years Day issue is decidedly local, focusing on farming and livestock, local deaths, and…a boy who shot off his hand?!

Lubbock, Texas, home of the Southwest Collection at Texas Tech University, has a small-town neighbor named Slaton, and in that town a newspaper has been published for over 100 years: The Slaton Slatonite. Its weekly volumes in the early 20th century were almost always the same as in this January 2, 1920, issue. Unique among many of our other papers, the Slatonite was heavily advertiser focused on its front page.

The Eldorado Success is the newspaper for the community of Eldorado in Schleicher County, Texas. Founded in 1901, it was previously known as the Eldorado Paper, the Success without the town’s name, and the Schleicher County Leader-Success. It’s still in publication today, albeit with features a little more concise than January 2, 1920’s Memorial Sermon by Reverend S. G. Dunn.

Ah, Hall County, Texas, home of The Memphis Democrat. A small, quiet place, whose newspaper first graced the local storefront on July 8, 1908. It was replaced by the Hall County Herald. Its front pages are often the most matter-of-fact among our collections, eschewing numerous ads to focus on the important events of the day. Such as why not to drink hair tonic and toilet water (spoiler: 3 in 4 chance of dying). 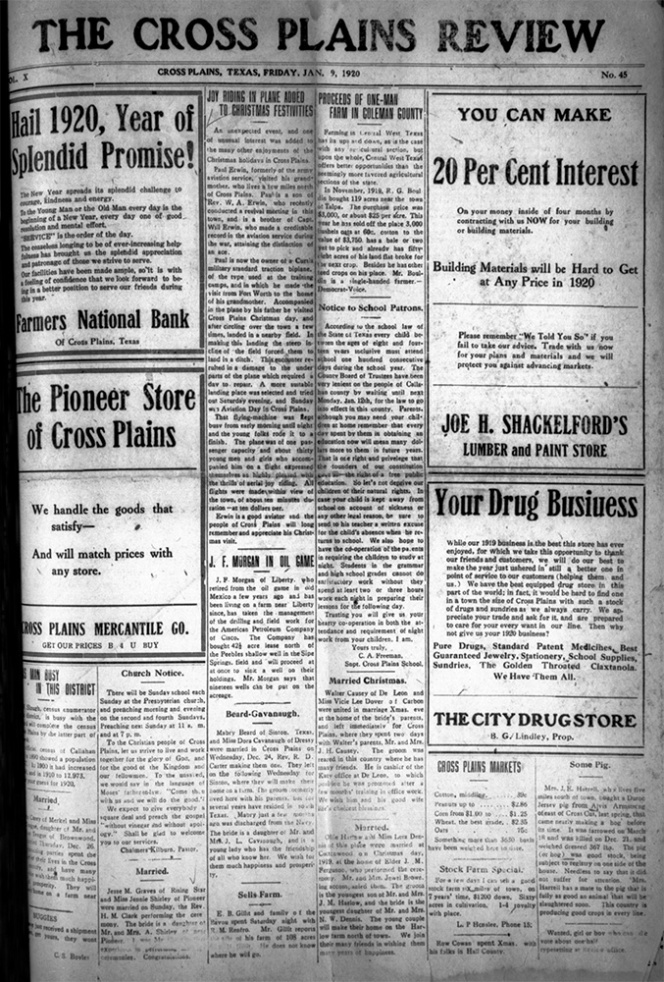 Finally, one of our favorite papers: The Cross Plains Review. Published in Cross Plains, Texas, for the people of Cross Plains and Callahan County, the Review might be most notable for publishing the stories of Robert E. Howard, creator of Conan the Barbarian. None of that is present in the January 9, 1920, issue here, sadly, instead featuring the more mundane day-to-day items of local folks.