On February 1, 2003, the Space Shuttle Columbia disintegrated over east Texas. All seven astronauts of the STS-107 mission lost their lives in that morning’s tragedy, but there was one, Commander Rick Douglas Husband, whose legacy has since directly affected us at the Southwest Collection. Rick was a graduate of Texas Tech University, a fact of which he was (in our opinion!) justifiably proud. That’s why, through a long and sometimes emotional process of working with his widow, Evelyn Husband Thompson, we were able to acquire his Papers and make them available to researchers worldwide. Through that process, we learned about the Columbia tragedy, of course, but more importantly we learned a lot about the man himself, and the dedication to rigorous study and training that would ultimately allow him to fulfill his life’s dream of space flight.

Husband had almost always wanted to be an astronaut. In 1977, during his tenure as an undergraduate at Texas Tech (where he graduated with a degree in mechanical engineering,) he wrote the letter above. “I would like to request any and all information you may have concerning astronaut pilot or mission specialist, and specific requirements which would be desirable to apply for those positions.” This was no idle request. NASA provided a long list, and Rick checked off each item until he made it to space for the first time 22 years later on the space shuttle Discovery.

Only the best of the best get to pilot and command space shuttles for NASA, and so Rick set out to become just that. After years of serving as a Test Pilot for the United States Air Force, he soon found himself taking advantage of other opportunities. For example, he relocated temporarily to England where he flew as an exchange test pilot in the RAF’s Aircraft and Armament Evaluation Establishment at Boscombe Down. Soon, between military and test pilot efforts, he had logged more than 3800 hours of flight time and was widely acknowledged to be something special in the cockpit.

At long last, he was offered his life’s dream in December 1994 when NASA requested that he join them as an astronaut candidate. He reported to the Johnson Space Center in March 1995 to begin a year of training and evaluation and, upon completion of training, Husband was named the Astronaut Office representative for Advanced Projects at the Center. For four years he put his engineering skills to work on projects such as Space Shuttle Upgrades, the Crew Return Vehicle (CRV), and studies to return to the Moon and travel to Mars. He eventually served as Chief of Safety for the Astronaut Office, all the while studying, memorizing, and rehearsing the information found in the manual above. Imagine 40 archival boxes full of similar material, the mastery of which is the baseline requisite for piloting a shuttle. We can imagine that easily, because we boxed and inventoried all of it. We are also all in agreement that none of us could have made the cut. Rick did, however, and in 1999 he piloted space shuttle Discovery on mission STS-96 to the International Space Station (ISS). He spent an ecstatic 235 hours in space on that journey, acquiring the skills that would allow him to command, not just pilot, his next space shuttle mission on the Columbia.

Training wasn’t all “how to fly a machine that takes off by basically detonating a bomb beneath you and comes back home at 17,000 miles per hour,” no matter how important that aspect is. Reams of paper describing programs for which he trained, all of which are covered with the distinctive handwriting seen on the image above, fill the archive that document his life. Details of conducting zero gravity science and engineering experiments; the maintenance of life support systems; even the extraordinarily rigid schedules and time management required to ensure effective day-to-day routines of sleeping, eating, and working–Rick had to master all of this, able to perform them in an environment that many of those who authored the materials had never experienced. And, in order to get some work done on the ISS, he also had to learn Russian in order to communicate with NASA’s international partners, as you can see in the excerpts from the training manual below.

We could go on and on about his many accomplishments as a pilot and astronaut, but there’s not enough room here to do it justice. And we haven’t even covered much of the everyday human qualities that also made him unique. He was a devout Christian, and spoke at churches or religious gatherings whenever he was asked. Students from kindergarten to undergraduate and graduate students at universities gathered to hear him speak, both in individual courses and at large events. Rick was dedicated to leveraging his good fortune in becoming an astronaut to educating and, perhaps, inspiring others to pursue their own passions.

The Rick Husband Papers are an amazing collection, documenting the career from college to NASA of an astronaut whose materials are worthy of study regardless of the tragedy in 2003 that brought Columbia’s crew international attention. Interested researchers and anyone else wanting to use this unique collection are encouraged to contact our top-notch Reference Staff who will help you sort through them.

This winter and spring the Southwest Collection’s Rare Books collection is proud to display its new exhibit, “Picturing the Sky.” Our Rare Books collection is phenomenal to say the least, containing over 37,000 items, including one of (if not the) largest collection of author Joseph Conrad’s works. It also preserves texts concerning science, religion, philosophy, and a host of other topics printed from the 15th century onward. This exhibit showcases one of its little-known but unique features: over 500 years’ worth of star charts and celestial maps!

The illustration above is the constellation Ursa Major, hand-drawn and colored in 1490. It is emblematic of the end of an era in which scientific accuracy played a secondary role to artistic expression. It emphasizes the forms of the constellations rather than accurately representing the locations of individual stars. Even the seven prominent stars of the Big Dipper, the most familiar stellar pattern in the northern sky and a hallmark of the constellation, are nowhere to be found.

Only 25 years later in 1515, the German artist Albrecht Dürer produced this star chart, the first of its kind to be printed in Europe. Not only was the Big Dipper correctly represented, but twelve radiating lines at 30 degree intervals, corresponding to the twelve signs of the zodiac, helped position all 35 constellations depicted. So accurate was Dürer’s 1515 chart that it could actually be used to find the positions of stars.

Dürer’s chart was of such importance that Peter Apian (aka Petrus Apianus), a prominent 16th century mathematician, astronomer, and cartographer, copied much of it verbatim in his own star charts of 1540, shown above. While Apian added additional figures to his chart, such as a pack of three dogs to the right of Ursa Major, its chief feature was that it could be revolved to show how the sky would look at any date between 7,000 BCE to 7,000 CE. This was managed through 21 volvelles, which are a layered series of intricately produced paper discs which can be freely spun. The volvelles shown here move the North Star through roughly half of its 25,000 year precession, which is caused by a slight wobble in the earth as it spins on its axis.

Wilhelm Schickard’s star chart of 1623, above, was one of the first to employ a conical section in a celestial map. That being said, his simplistic chart lacked the zodiac and instead incorporated Biblical references for the constellations. In another chart published in 1655, he changed the Big Dipper into Elijah’s fiery chariot while transforming the constellation Perseus into King David by replacing Medusa’s severed head with the giant Goliath’s.

Lastly we have Johann Bode’s 1782 depiction of Ursa Major. Astronomy and scientific illustration had clearly advanced in 300 years. Derived from earlier charts, Bode’s detailed drawing included a classification of stellar magnitude based on the Greek alphabet. The precise system of coordinating lines that bisects the constellation located celestial objects relative to the Earth’s equator as if it were projected out to infinity.

All the images in this exhibit are facsimiles reproduced from books found in our Rare Books collection. For assistance in locating and using this material, please visit the Holden Reading Room or contact our ever-helpful Reference Staff. 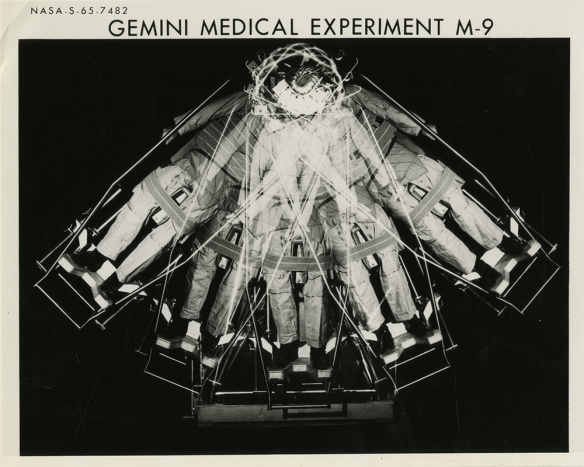 Last year, for the anniversary of NASA’s founding (July 29th, 1958, if you’re curious), we wrote a few words about Dr. Sherman Vinograd and his papers here at the Southwest Collection. We love the collection so much that a couple of months ago we also installed an exhibit that will be on display until around January 2015. It details his career and many significant accomplishments. This turned out to be a timely installation, as the good Dr. passed away on September 1, 2014.

In case you didn’t check out the previous blog (and you should!), Dr. Sherman P. Vinograd served as NASA’s Director of Medical Science and Technology from the fall of 1961 until the spring of 1979. In those 18 years he led NASA’s most fruitful medical, engineering, and vehicle development research relating to manned space flight. Among his many accomplishments was the establishment of the In-flight Medical Experiments Program, which evaluated human responses to extended space flight. Its experiments focused on sensory deprivation, which in Dr. Vinograd’s words “inspired” some of his staff to hypothesize that astronauts would hallucinate “little green men” when deprived of all sight, sound, and hearing. Fortunately, no one ever came close to hallucinating, proving the resilience of the human mind and body. 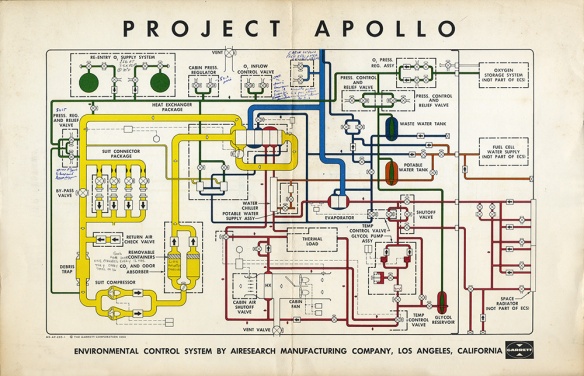 As most folks know, on July 20, 1969, Neil Armstrong and Buzz Aldrin of the Apollo 11 mission became the first humans to walk on the moon. The years of medical research, planning, and engineering that led to this triumph began in part with the scientific efforts of Dr. Vinograd and his team. As you can see above, they devised an elaborate but compact Environmental Control System that efficiently regulated and recycled all oxygen, water, and sanitation on board the cramped lunar module. Look closely: they recycled everything. Everything. One way or the other, Apollo 11 made the Dr. “very, very happy,” and he also heaped praise on the “astronauts…and that support crew that they had” who did all the heavy lifting to make it possible. It was, he summarized, “the pinnacle accomplishment of the century.” 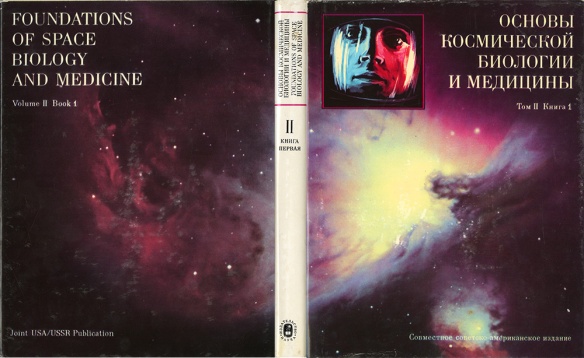 Another highlight of Dr. Vinograd’s career revolved around “Star City,” an area in Moscow Oblast, Russia, which since the 1960s is home to the Yuri Gagarin Cosmonaut Training Center (GCTC.) Named for the famed Russian who was the first human to journey into outer space, the GCTC saw years of collaboration between the U.S. and Russian scientists that ultimately resulted in 1975’s Apollo-Soyuz Test Project. That flight was not only the final Apollo and U.S. space mission until the arrival of the space shuttle, but also punctuated the end of the “space race” in which the two superpowers had been locked since 1957. It also resulted in awesome bi-lingual textbooks like the one above, of which we boast a complete set in both Russian and English!

Finally, one of the Dr.’s most impressive programs was the Integrated Medical and Behavioral Laboratory Measurement System (IMBLMS). Before lengthy space flights could occur, physicians had to determine if blood circulation, breathing, and even the ability to swallow food were affected adversely by zero gravity. The Mercury, Gemini, Apollo, and Skylab programs all relied heavily on IMBLMS’ experiments to ensure the safety of the astronauts.

To see all of Dr. Vinograd’s good stuff, check out his exhibit if you’re out our way in Lubbock, Texas. Or to see his papers in their entirety, don’t hesitate to contact our trusty Reference Staff! They’d also be happy to provide you with the papers of NASA Commander Rick Husband, leader of the ill-fated space shuttle Columbia mission. Husband, in fact, will be getting his own exhibit at the SWC in Spring 2015, which we encourage you to visit.