Did you know we have over 200,000 digitized volumes of newspapers from throughout Texas and New Mexico available online? Well, you do now! And one of this author’s personal favorites is the Lincoln Independent from Lincoln, New Mexico. The paper was founded in 1880, but the only run we’ve got our hands on is the entirety of 1890, beginning with the issue above dating from January 3rd. The remaining issues can be found here, but here are a few of our favorites below. 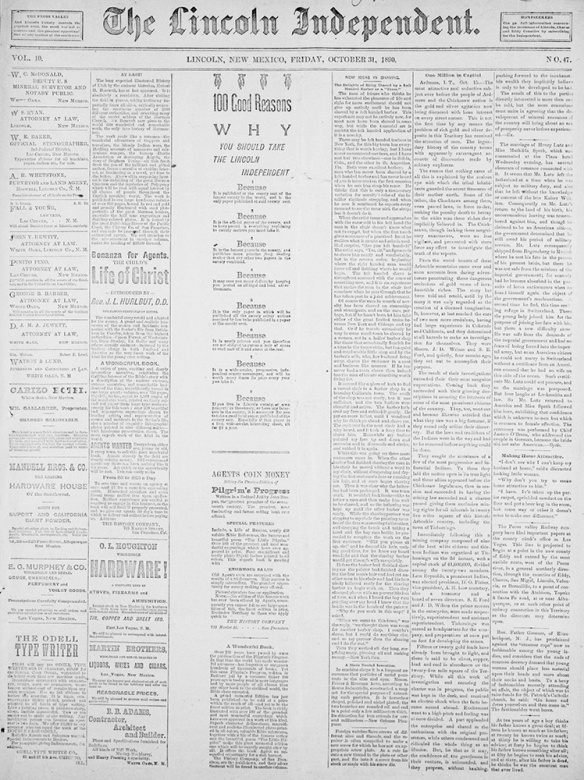 With Halloween coming up, we chose the issue above from October 31, 1890. Sadly, although Halloween is a ‘holiday’ of sorts was celebrated in the 1890s, with pushes from various groups to make it a community-oriented celebration. But it didn’t resemble today’s celebrations, or even those of the 1920s and 30s. Also, Lincoln County was absolutely the U.S. frontier (New Mexico would not become a state until 1912), so costumed frivolity may not have been their top priority.

One thing we were excited to find here at the Southwest Collection was this ad for the Angus VV Ranch. We have an archival collection related to the owners of the ranch, Charles M. and James E. Cree. It has been digitized and placed online, and contains information that the Lincoln Independent doesn’t share: a rash of cattle rustling that was occurring at the time!

Another tidbit we enjoyed was this advertisement for the Agricultural College of New Mexico in Las Cruces. This would later become New Mexico State University. And we want you to know that, in our opinion, it still has a very good library.

This all ends, as it probably should, with the final issue in our possession, dating from December 12, 1890. A comparison between the first and final issue reveals only one significant difference: the paper was begging readers to subscribe to the Independent. Here’s to hoping that their please worked.

If you’d like to read more of these papers, the many others we have from Eastern New Mexico, or the hundreds of thousands of others from throughout Texas, head over to our digital collections and dig in!