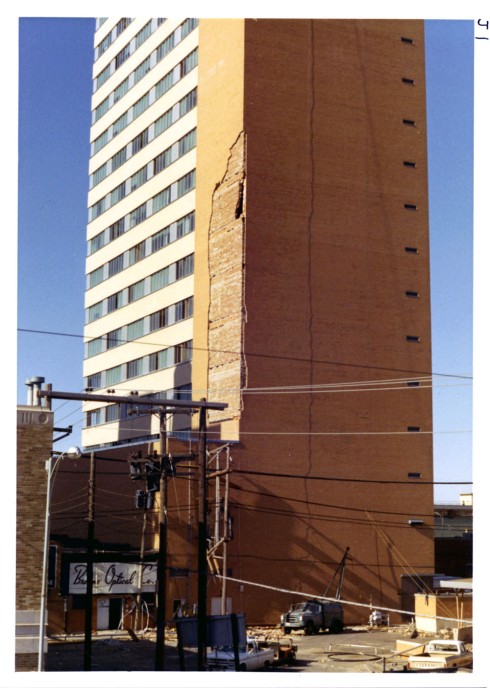 On May 11, 1970, a category F5 tornado tore across the city of Lubbock, Texas (home of the Southwest Collection,) affecting roughly a quarter of the town. Thousands of homes sustained damage and several hundred were completely destroyed. The damage totaled $250 million (approximately $1.5 billion if it had occurred in 2014,) 26 people lost their lives, and many more were injured. Not until an F5 tornado struck Joplin, Missouri, in 2011 was a town’s central business district so devastated. Last Sunday was the 44th anniversary of the disaster, and with that in mind we’re sharing images from our collections that relate to the event, such as this photograph of downtown’s Metro Tower. One of the tallest structures in Lubbock, it was easy prey for the high winds as you can tell by the section of façade that was sheared off.

Almost all of the issues of Lubbock’s newspaper, the Avalanche-Journal, dating from that time can be found among our collections. This issue from the day after, May 12th, describes the disaster in detail, including a rough sketch of the tornado’s path. As more details emerged over the next several weeks, the Avalanche-Journal would share them. In fact, the bulk of its coverage understandably centered around the tornadoes, their aftermath, and the resulting national attention that Lubbock received. 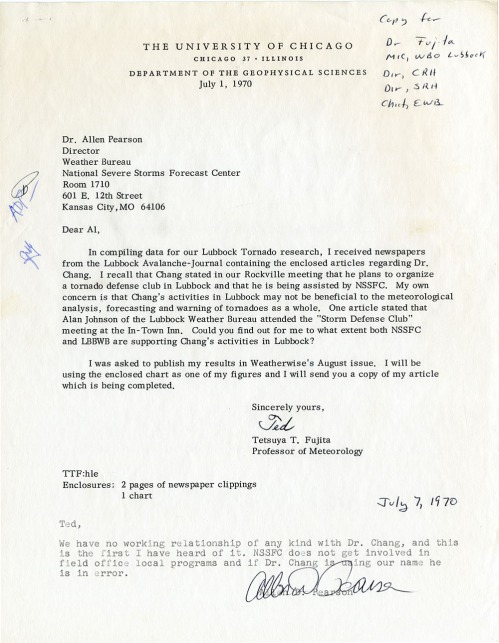 Scientific interest in this phenomenon ran high, drawing the attention of none other than Dr. Ted Fujita, the renowned severe storms researcher who created the F-scale for measuring tornadic intensity (in fact, the F in the scale is an abbreviation for Fujita.) The data he collected in Lubbock helped inform his theories about dual-vortex tornadoes, refine the F-scale, and better understand other meteorological causes and consequences of tornadoes. This letter expressing Dr. Fujita’s concerns about the spread of misinformation and the dangers it posed for safety during future storms is one of many items documenting his continued awareness of events in Lubbock. 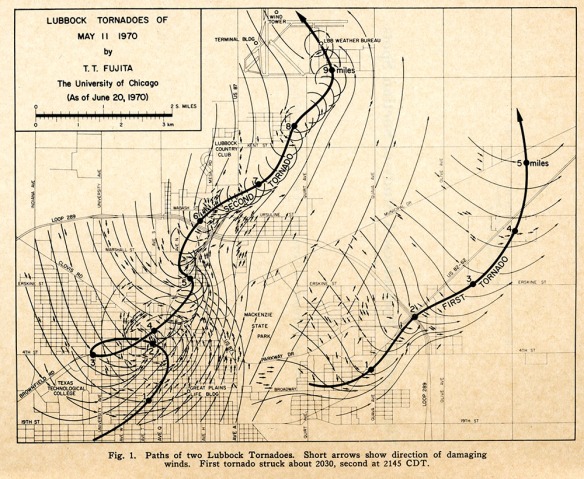 Among the data Fujita gathered were photographs, pieces of debris, and wind speed measurements from meteorological stations as far away as Odessa and Amarillo, Texas. Using those, he was able to assemble detailed diagrams such as this one, which shows the path and complex wind patterns of Lubbock’s two vortices. This is the final draft of a chart he used in his nationally-published Satellite & Mesometeorology Research Project report, Lubbock Tornadoes of 11 May 1970.

We’re ending with an aerial picture of the corner of Avenue Q and 4th Street (now the corner of Avenue Q and the Marsha Sharp Freeway.) This hotel was torn apart by the storm, as was much of that side of town, but as folks who drive through that intersection in recent years may have seen, a hotel can still be found there: the Inn of the South Plains. The buildings to either side of it, however, were never rebuilt. A tour of Lubbock’s affected areas today shows similar evidence of an effort to recover from one of the most devastating tornadoes in U.S. history. For those who want to see more of the Fujita Papers, or any of our other collections, weather-related or otherwise, our Reference Staff is always happy to arrange a visit.