The Southwest Collection has created a new exhibit entitled “From Here It’s Possible: West Texas Goes to the Stars,” featuring items from our many aerospace collections, as well as oral histories conducted with astronauts and NASA employees with West Texas and Texas Tech connections. This blog shares a few examples of featured individuals, but the exhibit displays many more. It will be installed by mid-February, and will be up until mid-June. Make sure to stop by and check it out!

William “Willie” McCool (above) was a graduate of Coronado High School in Lubbock, Texas. From there he attended the U.S. Naval Academy, graduating in 1983. During his naval tenure he earned a master’s in computer science from the University of Maryland, and in aeronautical engineering from the U.S. Naval Postgraduate School. Commander McCool served as a test pilot for the U.S. Navy, flying over 24 different types of aircraft. He joined NASA in 1996, and was the pilot of the Space Shuttle Columbia on the STS-107 mission.

Ginger Kerrick was born in El Paso, Texas, and spent her youth dreaming of a future career in space and athletics. A knee injury early in her college years led her to focus full-time on science education, and she transferred to Texas Tech where she earned her B.S. in 1991 and M.S. in 1993, both in the field of physics. She has now been employed for over two decades with NASA, holding multiple positions, most notably the first non-astronaut capsule communicator in 2001 and flight director in 2005, making her the first Hispanic female to hold that position.

Bernard Harris was an Astronaut, Mission Specialist, and EVA space walker on Space Shuttle Missions STS-55 and STS-63. He received his medical degree from Texas Tech School of Medicine in 1982, then later served on the Board of Regents of Texas Tech University. 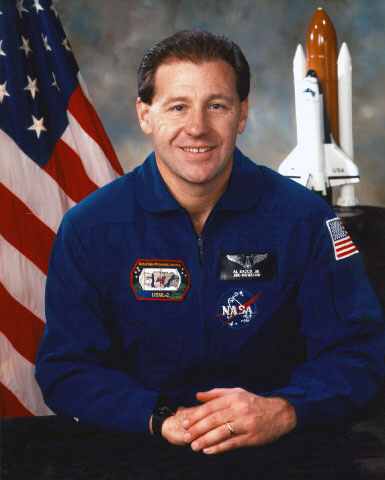 Albert Sacco was an Astronaut and Payload Specialist on Space Shuttle Mission STS-73. He is currently Dean of the College of Engineering, Texas Tech University.

Rick Husband graduated from Texas Tech in 1980 with a degree in mechanical engineering. Soon after, he joined the U.S. Air Force where he flew F-4 Phantoms, served as an instructor pilot and academic instructor at postings in the U.S. and Great Britain, and became an accomplished test pilot, flying over 40 different types of aircraft during his career. In 1994 NASA selected Col. Husband as an astronaut candidate, eventually assigning him the role of pilot on the space shuttle Discovery during its 10-day journey to the International Space Station on the STS-96 mission in 1999. He served as Commander of the space shuttle Columbia on the STS-107 mission.

But y’all – there are so many more West Texans and Texas Tech alumni featured in the exhibit. We encourage you to visit us and learn all about them! 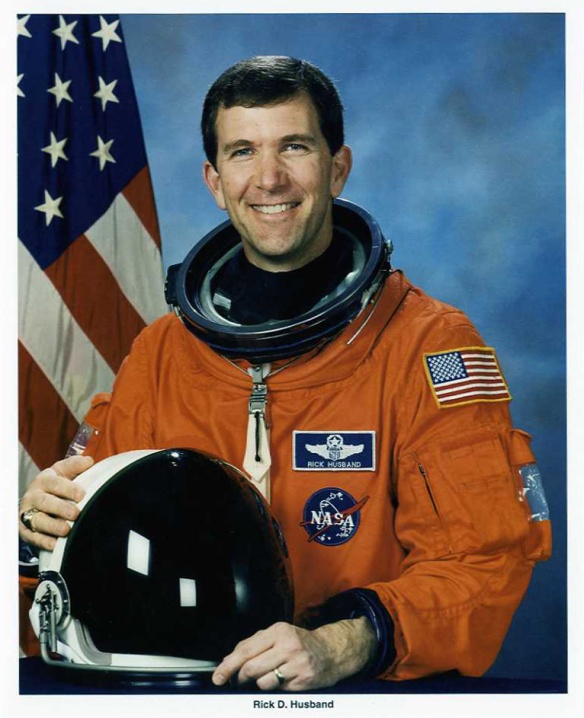 On February 1, 2003, the Space Shuttle Columbia disintegrated over east Texas. All seven astronauts of the STS-107 mission lost their lives in that morning’s tragedy, but there was one, Commander Rick Douglas Husband, whose legacy has since directly affected us at the Southwest Collection. Rick was a graduate of Texas Tech University, a fact of which he was (in our opinion!) justifiably proud. That’s why, through a long and sometimes emotional process of working with his widow, Evelyn Husband Thompson, we were able to acquire his Papers and make them available to researchers worldwide. Through that process, we learned about the Columbia tragedy, of course, but more importantly we learned a lot about the man himself, and the dedication to rigorous study and training that would ultimately allow him to fulfill his life’s dream of space flight. 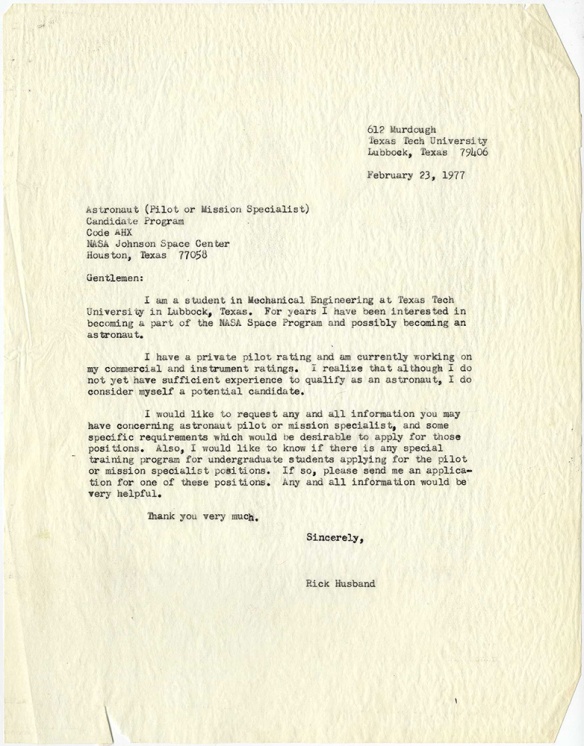 Husband had almost always wanted to be an astronaut. In 1977, during his tenure as an undergraduate at Texas Tech (where he graduated with a degree in mechanical engineering,) he wrote the letter above. “I would like to request any and all information you may have concerning astronaut pilot or mission specialist, and specific requirements which would be desirable to apply for those positions.” This was no idle request. NASA provided a long list, and Rick checked off each item until he made it to space for the first time 22 years later on the space shuttle Discovery. 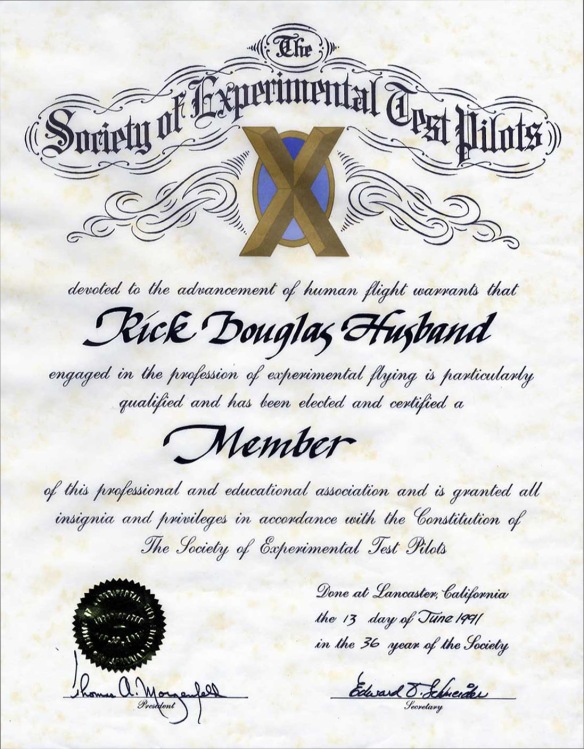 Only the best of the best get to pilot and command space shuttles for NASA, and so Rick set out to become just that. After years of serving as a Test Pilot for the United States Air Force, he soon found himself taking advantage of other opportunities. For example, he relocated temporarily to England where he flew as an exchange test pilot in the RAF’s Aircraft and Armament Evaluation Establishment at Boscombe Down. Soon, between military and test pilot efforts, he had logged more than 3800 hours of flight time and was widely acknowledged to be something special in the cockpit.

At long last, he was offered his life’s dream in December 1994 when NASA requested that he join them as an astronaut candidate. He reported to the Johnson Space Center in March 1995 to begin a year of training and evaluation and, upon completion of training, Husband was named the Astronaut Office representative for Advanced Projects at the Center. For four years he put his engineering skills to work on projects such as Space Shuttle Upgrades, the Crew Return Vehicle (CRV), and studies to return to the Moon and travel to Mars. He eventually served as Chief of Safety for the Astronaut Office, all the while studying, memorizing, and rehearsing the information found in the manual above. Imagine 40 archival boxes full of similar material, the mastery of which is the baseline requisite for piloting a shuttle. We can imagine that easily, because we boxed and inventoried all of it. We are also all in agreement that none of us could have made the cut. Rick did, however, and in 1999 he piloted space shuttle Discovery on mission STS-96 to the International Space Station (ISS). He spent an ecstatic 235 hours in space on that journey, acquiring the skills that would allow him to command, not just pilot, his next space shuttle mission on the Columbia.

Training wasn’t all “how to fly a machine that takes off by basically detonating a bomb beneath you and comes back home at 17,000 miles per hour,” no matter how important that aspect is. Reams of paper describing programs for which he trained, all of which are covered with the distinctive handwriting seen on the image above, fill the archive that document his life. Details of conducting zero gravity science and engineering experiments; the maintenance of life support systems; even the extraordinarily rigid schedules and time management required to ensure effective day-to-day routines of sleeping, eating, and working–Rick had to master all of this, able to perform them in an environment that many of those who authored the materials had never experienced. And, in order to get some work done on the ISS, he also had to learn Russian in order to communicate with NASA’s international partners, as you can see in the excerpts from the training manual below.

We could go on and on about his many accomplishments as a pilot and astronaut, but there’s not enough room here to do it justice. And we haven’t even covered much of the everyday human qualities that also made him unique. He was a devout Christian, and spoke at churches or religious gatherings whenever he was asked. Students from kindergarten to undergraduate and graduate students at universities gathered to hear him speak, both in individual courses and at large events. Rick was dedicated to leveraging his good fortune in becoming an astronaut to educating and, perhaps, inspiring others to pursue their own passions.

The Rick Husband Papers are an amazing collection, documenting the career from college to NASA of an astronaut whose materials are worthy of study regardless of the tragedy in 2003 that brought Columbia’s crew international attention. Interested researchers and anyone else wanting to use this unique collection are encouraged to contact our top-notch Reference Staff who will help you sort through them.