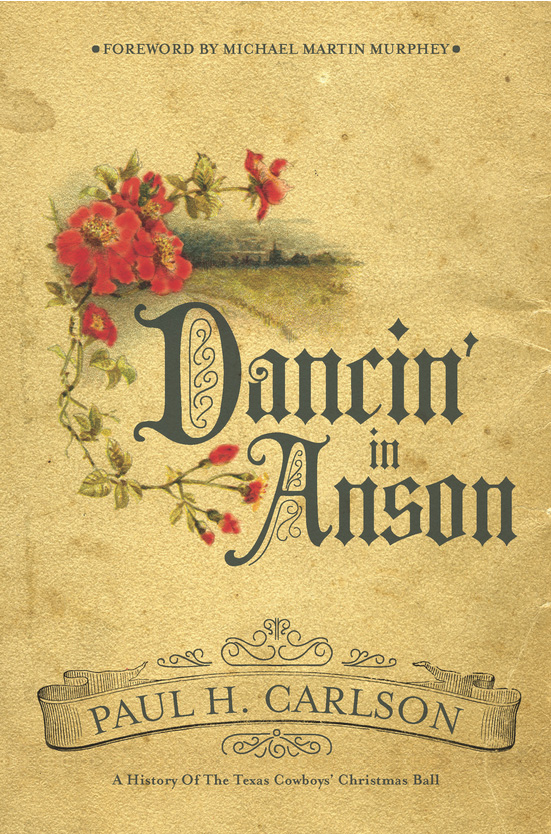 Last year, we told you about the Texas Cowboys’ Christmas Ball, a musical tradition held every December in Anson, Texas (in Jones County, roughly 25 miles northwest of Abilene). Because this year they’re celebrating the Ball’s 80th reenactment (and because we at the SWC enjoy it so much!), we’ve decided to tell y’all about it one more time. The event began at Anson’s Star Hotel in 1885 at a grand ball held in honor of the cattlemen of the region. William Lawrence “Larry” Chittenden attended that night and was so impressed by the festivities that he immortalized them in poetry. His “The Cowboys’ Christmas Ball” was first published in the Anson Texas Western in 1890 and subsequently in his Ranch Verses of 1893. 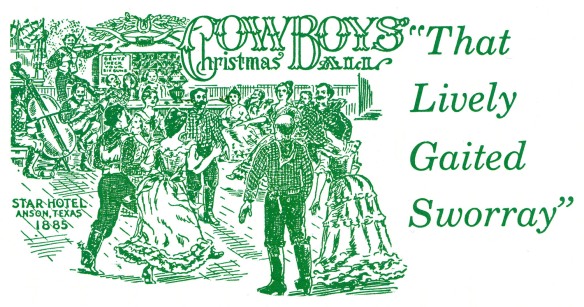 Chittenden’s poem was dedicated “To the Ranchmen of Texas,” and paints a vivid picture of a holiday celebration. The hotel was “togged out gorgeous” and decorated with candles, mistletoe, and “shawls” (which many have interpreted as blankets placed at the windows to insulate the hotel better). Lead by “Windy Billy,” who sang and called the dances, the crowded Star Hotel saw a very “lively gaited sworray” that evening. Chittenden even describes the original instrumentation: bass viol, fiddle, guitar, and tambourine. 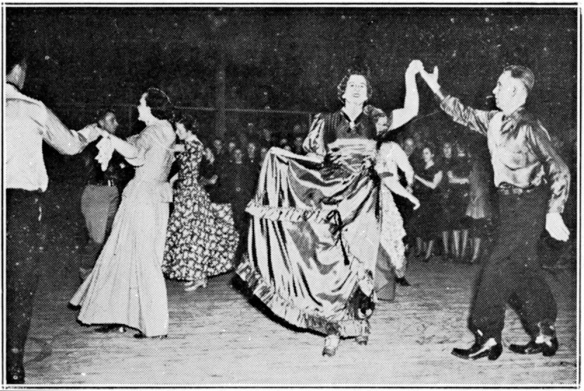 Anson, Texas would continue to see some Christmas celebrations similar to the ball held irregularly in the early 20th century, but it wasn’t until 1934 that the Texas Cowboys’ Christmas Ball was reborn when an Anson schoolteacher and local folklorist named Leonora Barrett helped stage the first re-enactment in the school’s gymnasium. Barrett insisted that the reincarnation of the ball retain the original dances, music, and customs of its predecessors, such as men removing their hats on the dance floor and women only allowed to wear skirts. Each year a newly-wed couple leads the ball’s opening grand march, one of eight dances that are traditionally performed there including the Paul Jones, the Virginia Reel, a polka, Schottische, two step, waltz, and ‘put your little foot.’ 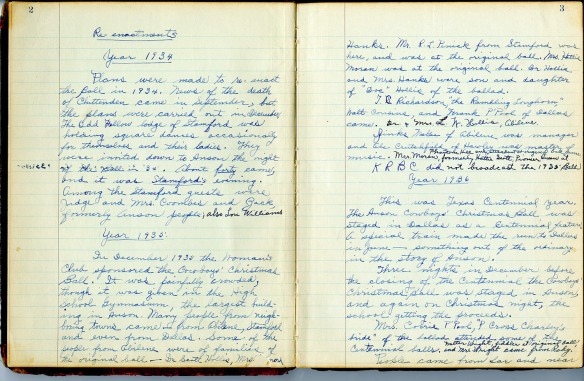 From the 1940s until the 1990s, few records exist of the ball. We know that it was a successful event based on newspaper articles, as well as the few surviving photographs, film reels, and one amazing ledger. The Southwest Collection is proud to house the original ledger (seen above,) started by Leonora Barrett in 1934 on the occasion of the first re-enactment. Each year she noted guests, hosts, broadcasts made by radio stations, the leaders of the grand march, and other pertinent details. The ledger was kept updated until 1994 and is one document that allows scholars to see the completely unbroken tradition. 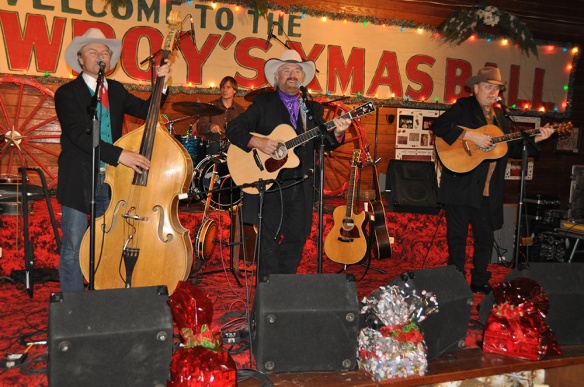 The Cowboys’ Christmas Ball was reborn in a sense in the early 1990s, when Michael Martin Murphey began performing as its annual headliner. In 2010, Murphey began donating his materials to the Southwest Collection’s Crossroads Music Archive, as well as putting the archive in touch with the Ball’s organizers. That led to the recent publication of Texas Tech professor emeritus Paul Carlson’s book on the Ball, Dancin’ in Anson, the cover of which headlines this article.

Though the music has been electrified and grown beyond four instruments, and historical dress is not required, attending the ball is still a festive step back into an older tradition. Each year, the ball is held on the Thursday, Friday, and Saturday prior to Christmas. If you would like to attend this year’s event, you can do it on December 18th, 19th, and 20th. For information on tickets, times, and directions, visit the Texas Cowboys’ Christmas Ball website.