In the words of Wichita Falls Mayor and Judge of the Corporate Court, T. Leo Moore, his city had ”bounced” infamous California gangster Mickey Cohen ”out of town” on August 30, 1950.  Later, Texas state officials held a hearing to assess whether or not Cohen had been looking to set up illegal gambling operations during his visit. The gangster had been subpoenaed, but as you can see from the documents above, he kindly explained why he was unable to attend. Soon after these events, in 1953 the Texas Legislature formed its Crime Investigating Committee. The Southwest Collection holds the entirety of their records, which offer an interesting perspective on “organized crime” throughout the state.

Consisting of nearly 40 pages of summarized evidence and testimony, the Final Report of the Crime Investigating Committee details the large scale of their investigation. Gambling in Houston and Galveston, general vice in Waco and Dallas, and bootlegging in West Texas were among the topics and regions that they examined. In our opinion, the bootlegging side of things was the most interesting because its legacy is still visible in the West Texas (home of the Southwest Collection, incidentally.)

For example, these minutes of a hearing held in Amarillo, Texas in November 1952 concern, among other things, the activities of alleged Odessa, Texas bootlegger Pinkie Roden. As further examination of the Crime Investigating Committee Records shows, Pinkie was the object of much of their scrutiny. He had constructed a regional crime empire. Elaborate procedures were in place to get booze into the hands of bootleggers, launder the money that rolled in, and protect Pinkie and his associates from reprisals. He was so successful that his stores are still in business today in Odessa, Midland, Lubbock, and elsewhere—albeit legally, now that those areas approach liquor sales more leniently. 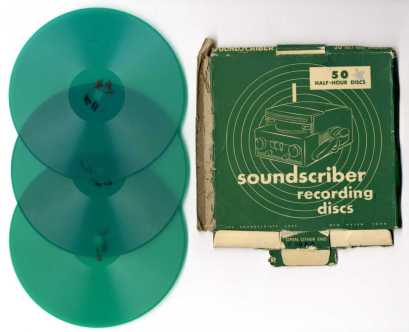 With hundreds of pages of evidence, testimony, and hearings to keep track of, surely the stenographers were hard-pressed to keep up. Not so! By the 1950s, sound recording media such as these Soundscriber discs were fairly popular. Although Dictabelt and Soundscribe recordings might now be perceived as of lower fidelity than more recent magnetic tape and LP discs, they are sometimes the only record of very pivotal moments in history (one of the most notable being Lyndon Johnson’s inauguration on Air Force One just after Kennedy’s assassination!) The discs pictured here are a sample of dozens created during the course of the Committee’s statewide proceedings. Transcriptions of their contents are present in our records, but it’s a unique (and very cool) experience to actually hear the events playing out over sixty years ago.

The items shared here represent only a fraction of the entertainment that these records hold. In fact, when combined with our dozens of oral histories with local bootleggers and their families, statewide criminals, and the police and judges who pursued them, the SWC might just have a gold mine of research material about Texas crime. Give our Reference Staff a shout and they will help you get your hands on them!