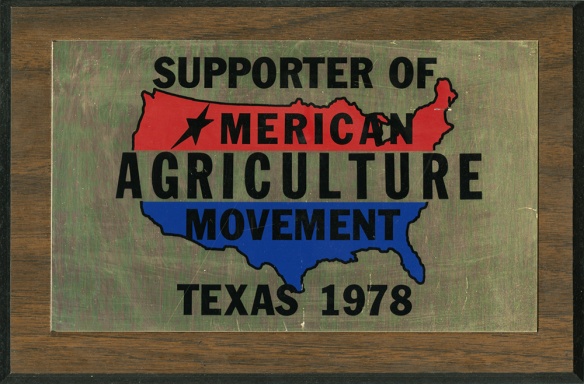 From March through mid-June, the Southwest Collection is exhibiting their American Agricultural Movement (AAM) records in an exhibit entitled Tractorcade! It commemorates the 35th anniversary of the AAM’s last great Tractorcade in 1979. Bringing together a host of oral histories, photographs, newspaper articles, and artifacts such as the plaque above, our curators attempt to tell this unique story of authentic American grassroots activism.

The AAM formed in Campo, Colorado, during 1977. Wanting the U.S. Government to address their concept of “Parity”—defined loosely as economic balance between agriculture, other industries, and the U.S. government—the AAM attempted to organize a farmer’s strike. Although widespread strikes didn’t take off immediately, later that year around 5,000 farmers held a tractor rally in Lincoln, Nebraska. Farmers in other states soon followed with their own rallies.

Sadly, sometimes the AAM’s activism would lead to violence. For example, on March 1st, 1978, a large group of protesting farmers was trapped on the International Bridge south of McAllen, Texas by city police on the U.S. side and Federal troops across the Mexican border. Protesters were tear-gassed and beaten, with 200 arrested and jailed. By the next day 2,000 more farmers arrived to join the protest. A thousand miles away on March 15th, 30,000 farmers arrived in Washington D.C. with the express intent of seeing the 1977 Farm Bill replaced. These events and many others were chronicled in local publications such as the American Agricultural News, digital copies of which—along with other digitized AAM materials—are available at the SWC. 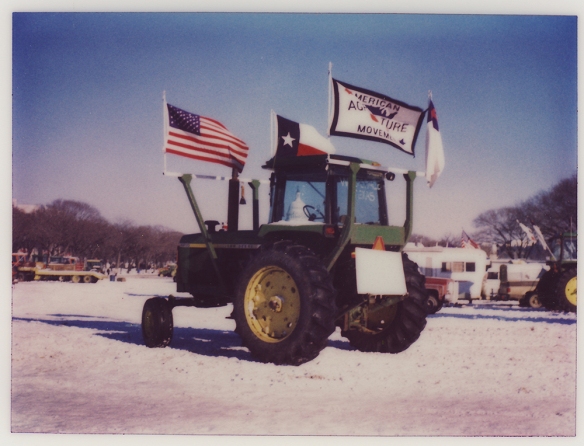 Not all efforts spawned violence. In January 1978, around 3,000 farmers drove their tractors to Washington D.C. The following year, farmers and their tractors made the trip to D.C. a second time, creating huge traffic snarls as they slowly made their way through the city. When at last they stopped at the National Mall, the police quickly penned them in with their squad cars and, later, with city dump trucks, hoping to prevent any further traffic disruptions. In spite of the heightened tensions caused by the corralling, there were only a few scuffles between farmers and police. By far most interactions between demonstrators and public officials were friendly, and often helpful. But in many cases top-level government and city leaders remained unsympathetic, as did public opinion.

Then came Presidents’ Day weekend, when a massive winter storm dumped two feet of snow on the Capitol city. The only vehicles capable of operating in the mess were the tractors, and soon the farmers were carrying policemen to emergency calls, transporting nurses, doctors and other emergency personnel to hospitals and fire stations, bulldozing the snow drifts that blocked whole streets, and generally helping out wherever possible. The trouble-making farmers were now heroes; what AAM leader Gerald McCathern dubbed “Gentle Rebels.”

Today, AAM serves as a watchdog for farmers as well as providing information useful to both elected and appointed officials who are responsible for forming farm policies. In June 2013, members from the AAM held a reunion in Lubbock, Texas, to discuss their shared history. The SWC worked with AAM members to collect oral histories, photographs, scrapbooks, and artifacts such as these to be preserved at the SWC. These materials are now available for research, and our helpful Reference Staff would be happy to help you find them.