For the last two years, our University Archives Women’s History Month exhibit entitled “The Women Who Shaped Texas Tech” has graced our hallways. It celebrates several women whose influence on Texas Tech University is still felt today. This year is no exception, and the exhibit has received several new additions for 2016! Check them out:

The first of this year’s celebrated Red Raider women is Hortense Williams Dixon, the first African American to graduate from Texas Tech with a doctorate degree. Born in 1926 in Houston, Texas, Dixon received her first degree, a B.S. from Prairie View State College, in 1946. An M.S. from the University of Minnesota followed in 1949, and in1970 she finally received an Ed.D. degree from Texas Tech. She specialized in education with a minor in home economics, which led to several academic positions including: Director of the Home Management Residence at Bishop College; Assistant Professor of Home Economics Education at Texas Southern University; and Part-time Instructor in Home Economics Education at Texas Tech University. After graduating from Texas Tech, Dixon returned to Houston to continue serving as an Associate Professor in home economics at Texas Southern University. 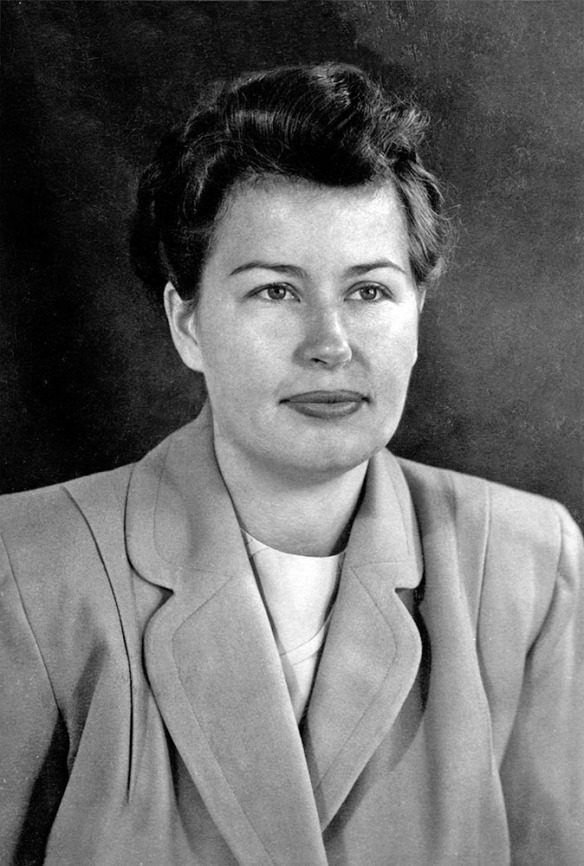 Edna Maynard Gott was born on March 19, 1920, in Chandler, Texas. After receiving a B.S. in Economics from the University of Texas in 1942 and an M.S. from Texas Tech in 1954, she became an instructor in Economics at Tech. For more than a decade she battled with the department and university administration for equality in teaching rank, promotion, and tenure. In the spring of 1973 she was promoted to the rank of Assistant Professor, and nine years later became the first woman to achieve tenure in the Department of Economics.

Her work focused on the economic status and challenges facing women and minorities. To advance the cause for women’s rights she not only unmasked the inequities toward female faculty in academia, but also coordinated the Lubbock Chapter of the National Organization of Women. Gott was also an active member of the International Center for Arid and Semi-Arid Land Studies where she served on the Women in Development committee and was a founding member of the Women’s Studies Program.

Born on July 5, 1917, in Lockney, Texas, Maxine Fry enrolled in Texas Tech in 1934 to study journalism. An active participant in campus life, Fry was a member of The Forum (later renamed Mortar Board), president of the Las Chaparitas sorority (later renamed Kappa Kappa Gamma), an occasional reporter for the Toreador newspaper, and winner of several school beauty contests including being named a 1938 Sun Bowl Princess.

In May 1937 she became the first elected female president of the Student Council. Under her leadership, Fry was able to successfully reinstate the school’s bonfire tradition. Bonfires had been banned by school administrators following outrage by Lubbock citizens over vandalism and theft of wood by Tech students. Her administration also wrote a revision of the Student Council’s constitution.

Fry went on to teach journalism for two years in Littlefield and Grandfalls, worked on The Midlander Magazine for its first seven years in publication, and was a charter member of the Midland Symphony Guild.

Marsha Sharp grew up playing three-on-three basketball in Tulia, Texas. During her junior year at Wayland Baptist University she began her basketball coaching career when she took charge of the freshman team. After graduating with a master’s degree from West Texas State University, Sharp transferred to Lockney High School as head coach of the Lady Longhorns.

In 1981 she joined Texas Tech as an assistant coach, and during her tenure became one of the most celebrated coaches in the history of women’s college basketball. Coaching the Lady Raiders from 1982 to 2006, Sharp elevated the program to national prominence.

Though she retired from coaching in 2006, her legacy continues. Established in 2004, the Marsha Sharp Center for Student-Athletes provides student-athletes with academic services. Currently serving as Associate Athletic Director of Special Projects, Sharp oversees the development of the Fearless Champions Leadership Academy and the Marsha Sharp Leadership Circle. 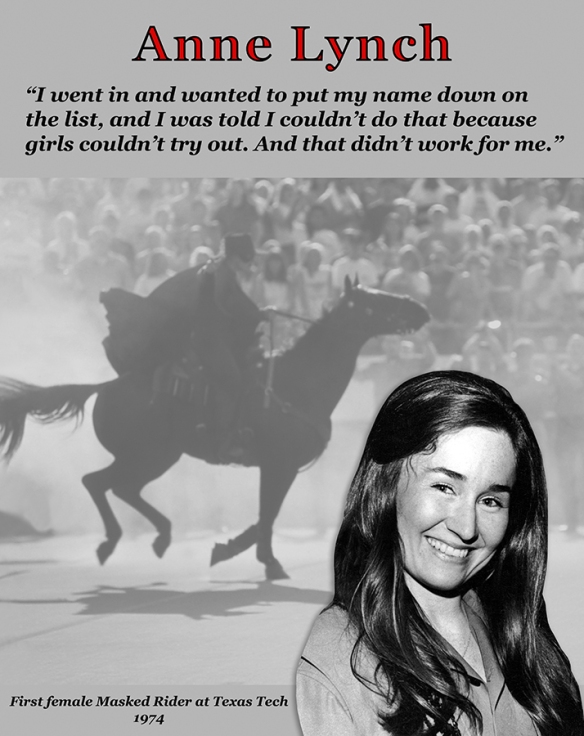 As an Animal Science major, Anne Lynch participated in Texas Tech’s Block and Bridle Club and Rodeo Club. While working in the horse barn of the Texas Tech Farm, Lynch became familiar with Happy V, the horse serving as the university’s animal mascot, and began riding him. She auditioned for the role of the Masked Rider, and in 1974 became the first female chosen to ride the sidelines for Texas Tech.

Although she had grown up riding horses and was familiar with Happy V, Lynch’s selection was met with skepticism. In the minds of some, women did not have the strength to handle the reins. Lynch had to convince football coach Jim Carlin and Animal Science chair Dale Zinn that she could indeed ride. Reaction to a female Masked Raider was mixed, but she had a successful year representing Texas Tech. Her proficiency in this role paved the way for future women to try out for the Masked Rider. Anne Lynch Hanson graduated from Tech in 1975.

40 years ago, Lucille Graves sat down with one of our oral historians to share her story as the first African American student at Texas Technological University. Having already received her bachelor’s degree in 1961, Graves tried to attend Texas Tech to receive her masters but was repeatedly refused entrance on the grounds that its charter stipulated that the university was established for white students only. With the help of the NAACP, she confronted the university and was at last admitted after a phone call from Texas Tech President R. C. Goodwin. Soon Tech saw a peaceful, non-violent integration of the traditionally white college. In 1955 Graves was also the founder of Mary and Mac, the first black private school in Lubbock, Texas. She chose the name of her school after the children’s nursery rhyme, declaring that the “poem depicts the act of boys and girls in their desire to become useful in this society.”

So stop on by and visit the “Women Who Shaped Texas Tech” exhibit, or its companion exhibit in the main Library. They will be on display until June, so you have plenty of time to take them in.