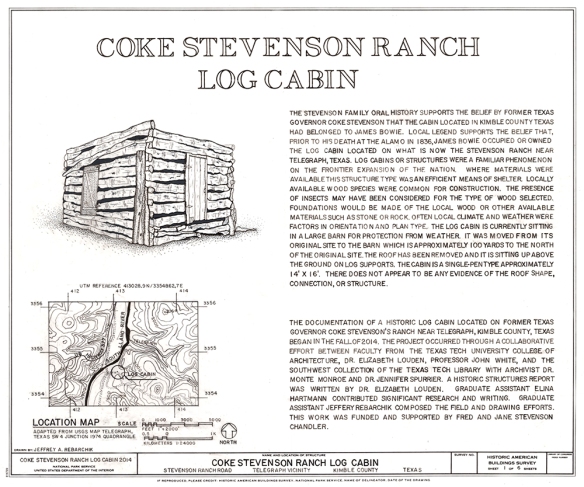 A couple of years back, the Southwest Collection acquired the papers of Texas Governor Coke Stevenson. While loading up archival boxes at the Stevenson ranch hidden back amongst the cedars near Telegraph, Texas, Stevenson’s daughter revealed to us a hidden treasure. Tucked into a barn on the property was a log cabin that, according to family lore, once belonged to Jim Bowie, inventor of the Bowie knife and hero of the Texas Revolution who died at the Alamo on March 6, 1836.

The Southwest Collection staff are not only archivists, but also historians. Therefore we listened to the tale with a mix of hope for its veracity, but also our innate academic skepticism. Fortunately, over the years we had tackled similar archeological questions with help from two professors from the Texas Tech University Architecture Department’s Historic Preservation Program: Dr. Elizabeth Louden and Dr. John White. They didn’t just teach undergraduate and graduate students the basics of evaluating historic structures and planning for their preservation. They were prone to lacing up their hiking boots and working in the field, bringing their expertise to claims like Stevenson’s. Louden and White could get to the bottom of this. 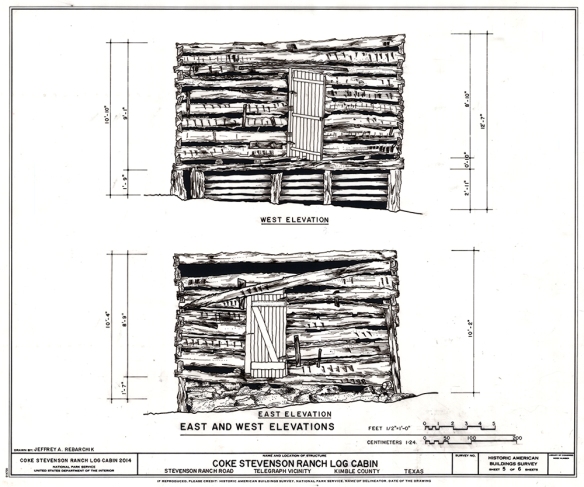 And so they set to work in 2014, applying the standards of the National Park Service’s Historic American Buildings Survey to the “Coke Stevenson Ranch Log Cabin,” as the final report titled it. The images here depict some of the results of their survey. Although these are hand-drawn, the Southwest Collection houses many of the digital 3D models and architectural renderings that Louden and White created. 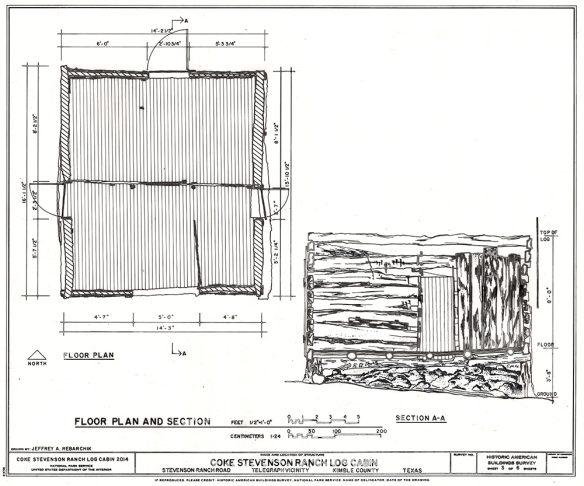 So what did they learn? A lot about the structure itself, for one thing. It measured 14’ by 16’, with no interior walls (a “single pen-type,” as they described it.) It had been moved 100 yards from its original site to the shelter of the barn where it still rests atop several vertical log supports. Its roof had been removed, leaving no evidence of its shape or how it had been joined to the rest of the cabin. It also sported an amusing set of painted ducks on its north side.

But was it Bowie’s? Well, it is likely that Bowie owned more than one cabin during his itinerant days on the US frontier. It is not, however, certain what happened to them after 1836. And so we are sad to report to you that, as with so many archaeological questions, we still don’t have a definite answer. However, we’re happy to repeat the Stevenson family’s story and provide the results of Louden and White’s months of work, so that future researchers can take a crack at the tale of Jim Bowie’s log cabin.

The Southwest Collection/Special Collections Library will soon be exhibiting portions of the papers of Texas Governor Coke Stevenson. Documenting his life and career from childhood to retirement in Junction, Texas, the exhibit will run from mid-spring to mid-summer.

Coke Stevenson was born on March 20, 1888, at his grandparents’ home between the little towns of Katemcy, Fredonia, and Pontotoc, in Northeast Mason County, Texas. Throughout his life Stevenson was an entrepreneur and civic leader: a cowboy at ten; the owner of a freight-line between Junction and Brady, Texas, at sixteen; a janitor who worked his way up to bank clerk by 18. Ultimately, he became a member of the bank’s board, and later became president of several banks. He was part owner of grocery, drug, and, hardware stores, the Junction Eagle newspaper, the Fritz Hotel, and Llano River Irrigation and Milling Company, along with water, electricity, ginning, grist mill, and irrigation businesses. He apprenticed under a former state judge, and the Fourth Court of Civil Appeals admitted him to the bar in 1913. Remarkably, he only completed twenty-two months of formal education.

Stevenson served two terms as Kimble County Attorney and County Judge, but soon was was elected to the Texas House or Representatives, where he became its first two-term Speaker.  In 1938 he was elected Lieutenant Governor and was reelected in 1940 before assuming the governorship in August 1941, when W. Lee “Pappy” O’Daniel resigned to fill the U.S. Senate seat vacated by the deceased Morris Sheppard.  Stevenson served two gubernatorial terms during World War II, during which time he supported the war effort and President Roosevelt, and inspired the Good Neighbor Commission.

Affectionately known as “Mr. Texas,” after the war he ran for O’Daniel’s vacated U.S. Senate seat against Congressman Lyndon B. Johnson.  He lost a contested run-off when George Parr, the so-called “Duke of Duvall County,” allegedly had Voting Box Number 13 stuffed with 202 ballots that tilted the election to LBJ.

Politics wasn’t the entirety of Stevenson’s life. In 1913 he married Fay Wright, and soon they were blessed with a son, Coke Robert Stevenson, Jr. Fay died in 1942 while Stevenson was governor. After leaving public office he married in 1954 the Kimble County District Clerk, and widow, Marguerite King Heap, with whom he had a daughter, Jane Stevenson. After the failed Senatorial campaign, Stevenson returned home to his Kimble County law practice, friends, and ranch. There he cowboy’d for a while, and took extensive road trips with his family, visiting all 48 contiguous states. He died at 87 years of age on June 28, 1975.

That’s the biography, but the exhibit is so much more! Come by and take a look at it if you have the opportunity. Also, if you’d like to view the Coke Stevenson Papers, they will be available for research use before the exhibit ends. Our Reference Staff will always help you find what you need. 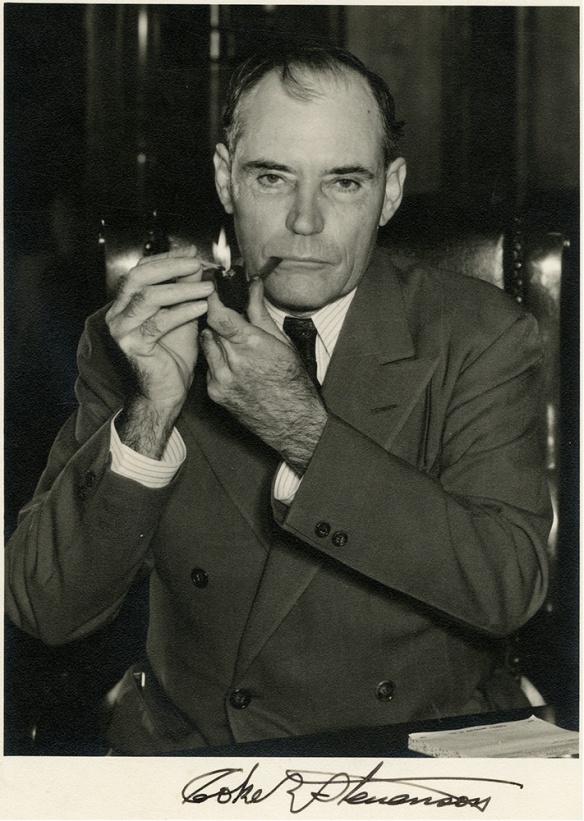