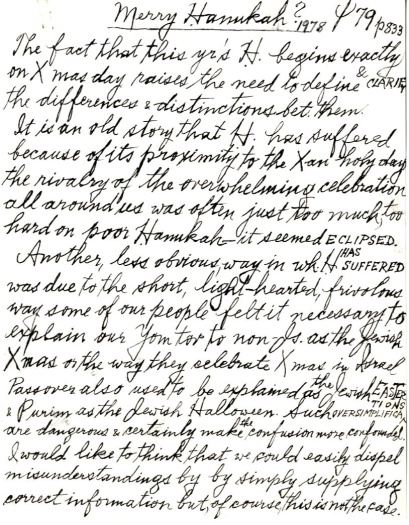 This year Hanukkah, an eight-day Jewish holiday also known as the Festival of Lights and Feast of Dedication, began on November 27th and will continue until sundown December 5th. The Jewish community of Lubbock, Texas (the city in which the Southwest Collection is located) has been celebrating this holiday at its Congregation Shaareth Israel since 1934. From 1960 to 1980, Rabbi Alexander Kline presided over this event, and his papers at the Southwest Collection contain a tremendous amount of his research into and personal thoughts about the holiday. These culminated in the sermons he would share with the congregation.

An art historian well as a rabbi, Alexander S. Kline was born in Budapest, Hungary in 1903. He emigrated to the United States in 1921 to study art history at the University of Cincinnati, and was ordained as a Rabbi in 1933. He received his Doctor of Divinity from the Hebrew Union College in 1958. While Rabbi of Congregation Shaareth Israel, Kline was known for his art lectures at the Museum of Texas Tech University. But his thoroughly-researched, scholarly sermons were what touched the heart of the Lubbock Jewish community. Each piece was written by hand on the back of memos, bulletins, correspondence with other religious groups, and a host of other documents that are an interesting set of research materials unto themselves! The image above is the first page of his sermon on Hanukkah delivered in 1978. 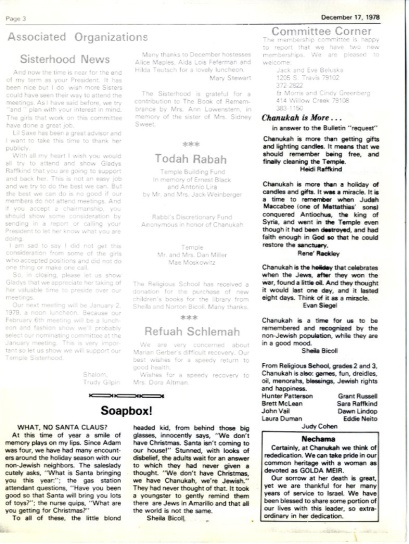 Before composing his sermons, Rabbi Kline would review all of the information he had gathered throughout decades of rabbinical service. The sermon about Hanukkah was no exception. One of its themes addressed ignorance. During the holiday season, Jews often found themselves being asked about their Christmas plans. At the bottom of the image above, taken from the December, 1978 issue of Amarillo, Texas’ Temple B’Nai Israel Bulletin, an anecdote that Kline cited to address this phenomenon can be seen (although the explanations of Hanukkah by 2nd and 3rd graders, located along the side of the paper, deliver their own amusing message.)

This image is not only a great example of why none of us should store newspaper clippings atop other documents (they emit hydrochloric gas, resulting in the brown rectangles across the middle of the paper,) but is also one of the bases for Kline’s other theme: tolerance. This is the first page of a document describing an incident that occurred in White Plains in 1950. Although the event transpired nearly three decades before Kline’s sermon, examples like this helped Kline outline the historical tension between two religious groups that had long struggled to negotiate a relationship within the bounds of the freedom that America provided.

What then could Jews do to combat ignorance and encourage tolerance? Rabbi Kline proposed many answers, but above excerpt from The Southern Israelite on November, 30, 1956, was one that he adhered to closely. Take pride in your Jewishness, he counseled, and emphasize the magnificent holidays in the Jewish calendar, namely Hanukkah, that young Jews could enjoy while surrounded by Christian’s festivities.

Rabbi Alexander Kline’s papers are full of intriguing lectures granting insight not only into his rabbinical mind, but also into the unique needs of a West Texas Jewish congregation. We’ve published other blogs about the Congregation Shaareth Israel as well as our other Judaic materials, and we encourage you to take a look at those as well. And, as always, curious researchers may contact our Reference department to arrange to view any of our collections. 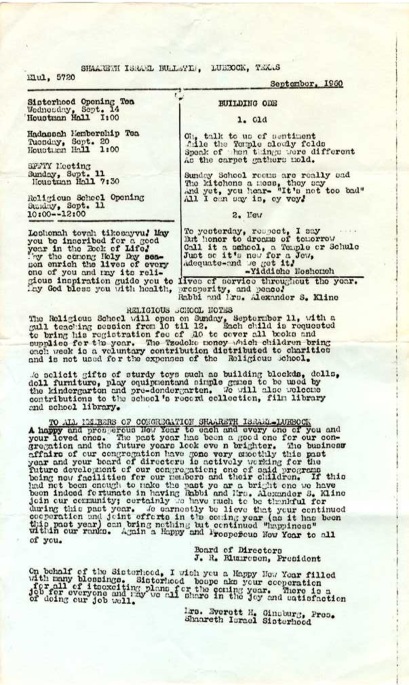 This is the cover page of the first issue of Congregation Shaareth Israel’s monthly newsletter.

There are more than a few collections housed at the Southwest Collection that focus on religion. We hold, for example, the records of the local and greater Texas Unitarian Universalist Church as well  as those of various Lubbock Christian congregations. Perhaps some of our most interesting collections record the history of Lubbock’s Jewish community, the largest of which is the records of the Congregation Shaareth Israel.

The Congregation traces its origins to the early 1930s when the success of Lubbock’s Jewish community in business, and its overall satisfaction with the area, enticed more individuals and families to move to Lubbock. As a result, the need to establish a synagogue was soon identified. Several different buildings were adopted or built to house the growing congregation over the ensuing years, the most prominent of which was a Synagogue built at 23rd and Avenue Q in 1942. Most recently, in 1985, the Congregation built a temple in southwest Lubbock.

The records contain eclectic materials ranging from art history notes to artifacts, correspondence between members as well as between the Congregation’s administration and national organizations, membership directories, and financial and legal records. A complete set of newsletters, such as the one depicted in the image above, dating from 1960 until the mid-2000s are present, as are a number of photographs and sermons. Many materials relate to the new temple’s construction in 1985, as well as to the life and career of the Congregation’s longest serving rabbi, Alexander Kline, who presided from 1960 to 1981. An ongoing effort to gather oral histories from long-time community members has resulted in a number of recordings that are also available to SWC patrons. 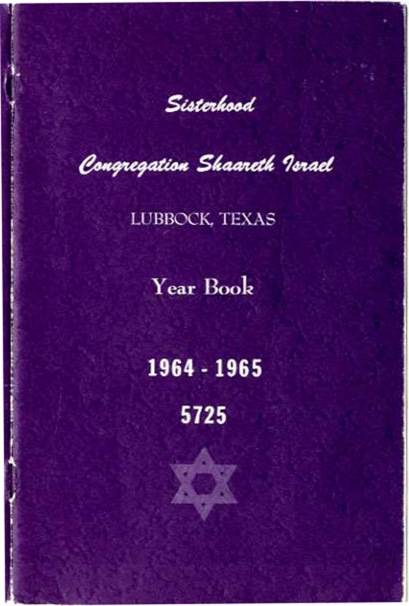 Much of the collection pertains to religious and service groups associated with the Congregation, such as its ‘Sisterhood’. The Sisterhood was involved closely with the Lubbock community at large, most notably through the Food-a-Rama hosted each year from 1969 to 1986. This was an event in which the Sisterhood cooked and sold traditional Jewish foods to the larger community. Once a year, Lubbock residents lined up to buy knishes, blintzes, cabbage rolls, and matzah ball soup.  Food-o-Rama was a major fundraiser for the congregation until it was discontinued. From 1959 until the present, the Sisterhood has published their Year Book, an example of which can be seen in the image above. The Year Book chronicled the activities of Congregation members and other events of note in the Jewish community.

The Congregation strove to closely align itself with Lubbock, Texas at all levels, but also provided for its membership in tangible ways. The document above is the purchase agreement between the Congregation and the Lubbock City Cemetery to procure plots for local families. Assisting with these arrangements has been a mainstay of Lubbock’s Jews since the 1920s, years before even the Congregation was officially established.

It’s difficult to do justice to unique scope of these records. They are a treasure. When matched with related collections, such as the papers of the aforementioned Rabbi Kline or the gathering of miscellaneous West Texas Jewish history the SWC has dubbed the Jewish Archival Collection, they only become more useful. We encourage interested researchers to contact the Southwest Collection’s Reference Department to arrange for a closer look. Furthermore, Congregation Shaareth Israel’s history as told in its own words, as well as its contemporary events and activities, can be found on their website.