We love poring through old issues of Texas Tech’s student newspaper, The Toreador (or the University Daily, depending on the vintage.) We already told you a bit about this obsession not long ago, particularly about our love for vintage advertisements (not to mention the TTU student body’s obsession with streaking.) Truly the 1970s held a wealth of advertisory entertainment, and we’ve come across a few more to keep you entertained. Incidentally, these can all be found in an exhibit currently on display at the Southwest Collection. Come on by and check that out, too!

As for the mustache ad above…there’s very little to say about this ad that it doesn’t say for itself, so let’s move on. 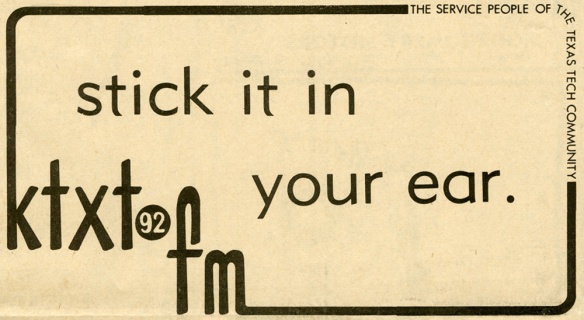 KTXT is TTU’s college radio station, and has been since the 1950s when it was known as KTTC on AM radio, and later KTXT at 91.9 FM. It’s now 88.1, and continues to “stick things in your ear,” primarily music and student talk radio.

Town Draw seems like a fairly innocuous local bar, given this ad. Just look at the cheerful cartoon folk strolling its wood floors, blissfully unaware of how hard they’re violating copyright. And that wasn’t the only lawbreaking that went down at the Town Draw. In one interview (which we sadly haven’t been able to track down in the archive again before posting this,) a musician who long-since left Lubbock, Texas, claimed that “everyone (he) knew had a story about that they almost got killed there.” It is remembered fondly by some of the bands played there, however, so it couldn’t have been all that bad… 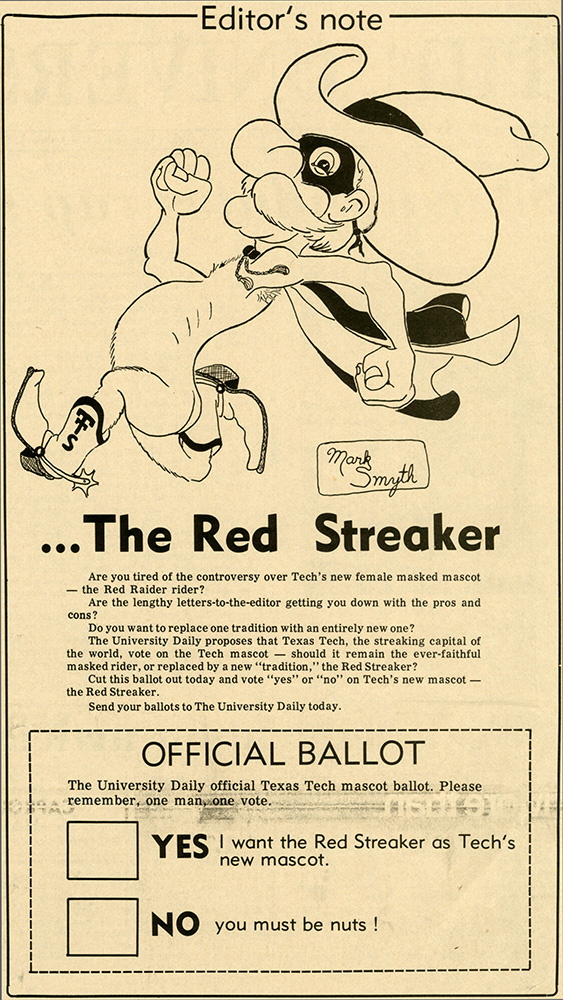 We told the tale a while back of streaking’s tremendous popularity on the TTU campus in 1974. Some of the more diplomatic among the University Daily’s staff used this trend to defuse a growing controversy in 1974 over the first female Masked Rider (TTU’s black-clad horseman (or woman) who races the sidelines of every home game.) Why not discard the horse entirely, they proposed, and have someone streak the field before every game? A handy ballot was provided, and while we’re not sure what the precise tally was, the fact is the Masked Rider still rides today.

In March 1976 some Red Raiders were getting excited about a TV show that had ended its run 7 years before: Star Trek. Its creator, Gene Roddenberry, was about to visit the Student Union Building (still called the University Center, or “UC,” at that time – hence the logo.) By all accounts, the room was packed.

So come on by the ol’ Southwest Collection/Special Collections Library and check out this exhibit (or any of its very fine neighbors.) And if you need to see some other newspapers, or just get some research done in general, our always-on-point Reference Staff would be happy to get you all set up.