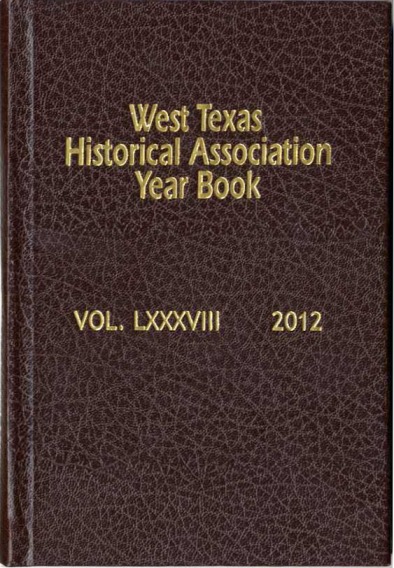 The Southwest Collection/Special Collections Library has long been proud to house the offices of the West Texas Historical Association (WTHA.) Organized in 1924 in Abilene at Simmons College (now Hardin-Simmons University), the WTHA arrived at the SWC in 1996. The organization has two hallmarks. The first, its annual meeting, a conference at which lay and professional historians share their research over the course of two days, will be held for the 90th time in Odessa, Texas this April. The second is its annual publication, the West Texas Historical Review (formerly West Texas Historical Association Year Book), the most recent cover of which can be seen above. 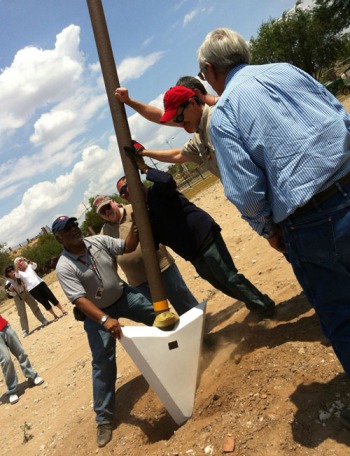 The WTHA also partners with other local and regional organizations to preserve the history of West Texas. Most recently it has worked with the Quanah Parker Trail to promote that organization’s installation of “Giant Arrows” marking locations of historical significance to the life of late-nineteenth-century Comanche chief Quanah Parker. The image above comes from the ceremony celebrating the arrow that was planted at the American Museum of Agriculture in Lubbock, Texas in July 2012. 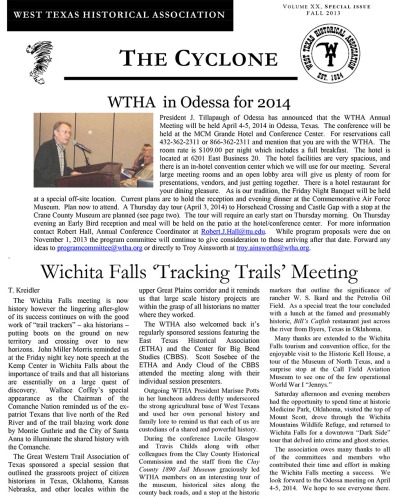 Although the West Texas Historical Review—which we’ll tell you more about below—is the repository of the WTHA’s scholarship, its newsletter The Cyclone is the main method through which it shares information about upcoming events, related organizations, and various other topics. The most recent issue of The Cyclone can be found here.

The most significant contribution made by the WTHA to the preservation of West Texas history is the West Texas Historical Review. Its first volume appeared in 1925, and has continued publication to the present day. The forthcoming 89th volume will contain articles on a host of topics, including depictions of West Texas on television, reexamining accounts of Civil War battles in the region, and the unexpected connections between San Angelo, Texas and Africa’s 19th century Boer War. Reviews of books about West Texas history as well as a thorough bibliography listing books and periodicals published about the region’s history in the past year are also included.

So head on out to Odessa this April to attend the WTHA Annual Meeting. At the very least, take a look at the WTHA on Facebook to see the images documenting West Texas History that they regularly share. And if you’re interested in becoming a member of the organization (which includes a subscription to the Cyclone and the Review!), don’t hesitate to do so.