2015 is coming to a close, and the SWC is looking back at some of its favorite images of the past year. (Also, because no one is in the archive for the holidays, we shamefully admit to the necessity having to recycle content!) So here they are – the best of 2015!

For example, back in July we noted that archives have nigh innumerable boxes. But when the Ag Movement tractors and I asked our Registrar to come up with a box-related joke, he replied “If they wanted us to use good grammar they should have made it more easier.” He stands by that statement to this day.

Less silly but equally entertaining is this footage of our Earth as seen through the first color satellite footage ever taken from space! Well, the footage of the earth is real. As a savvy user pointed out, however, the background and its immobile stars probably aren’t…

Every other Wednesday around here is dubbed “Western,” y’all, but sometimes we eschew the rodeos, cowboys, and ranching for a classic Ford Fairlane station wagon.

In January, we installed an exhibit on Texas Tech’s Dairy Barn, a 90-year-old symbol of the campus, still preserved today just yards away from the Southwest Collection. Here’s a photograph of it today, surrounded by our crowded campus, and then, surrounded by…pretty much nothing! 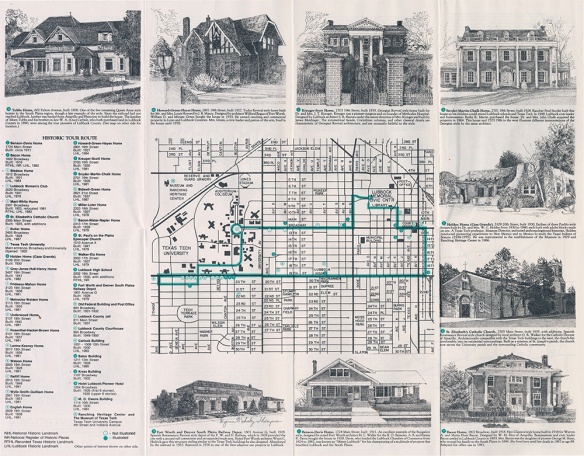 While every other Wednesday is “Western Wednesday” around here, all the remaining Wednesdays are “Map Day!” One of our most popular maps this year was, curiously, this 1988 map of historic homes and buildings in Lubbock, Texas, produced by the Lubbock Heritage Society and some of their partners. 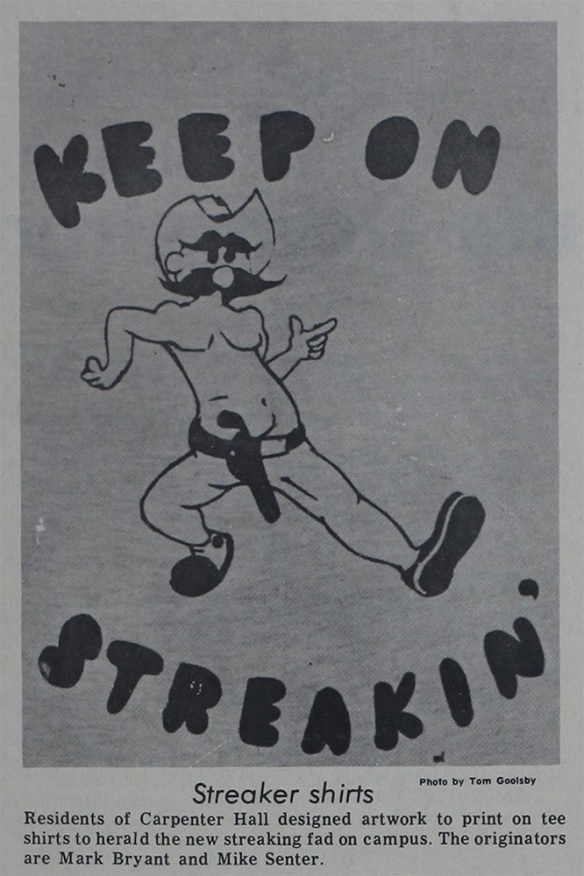 We see many bizarre advertisements in our newspaper collections, but few are like the one we found in the spring of 1974: an obsession with streaking in Texas Tech University’s University Daily. No one knows how it started. Some say that streaking had been popular on campus for years already. Others claim that Ray Stevens’ hit, “The Streak,” which debuted in March 1974, was responsible. All we know for sure is that by the time the campus got good and warm, t-shirts featuring the logo above were widely available.

Finally, we have an image from one of our favorite blogs this year. It described our photograph collection of the Tarahumara, a people of the Sierra Madre Mountains of Chihuahua, Mexico, who’ve weathered centuries of attention by Spanish, French, and Mexican governments. They still hold on to many of their original cultural traditions. In the village of Wawatzerare, for example, this woman still carries her baby in a rebozo. This shot was snagged by Father Luis Verplancken, a Jesuit who served in Chihuahua for decades, and who created all of these photographs.

So there you have it: a taste of our favorite images of the year. Keep an eye out for next year’s stuff. It’s bound to be as good (or even better!) 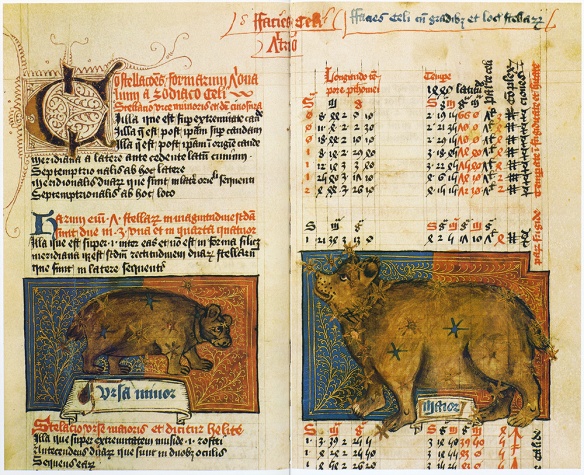 This winter and spring the Southwest Collection’s Rare Books collection is proud to display its new exhibit, “Picturing the Sky.” Our Rare Books collection is phenomenal to say the least, containing over 37,000 items, including one of (if not the) largest collection of author Joseph Conrad’s works. It also preserves texts concerning science, religion, philosophy, and a host of other topics printed from the 15th century onward. This exhibit showcases one of its little-known but unique features: over 500 years’ worth of star charts and celestial maps!

The illustration above is the constellation Ursa Major, hand-drawn and colored in 1490. It is emblematic of the end of an era in which scientific accuracy played a secondary role to artistic expression. It emphasizes the forms of the constellations rather than accurately representing the locations of individual stars. Even the seven prominent stars of the Big Dipper, the most familiar stellar pattern in the northern sky and a hallmark of the constellation, are nowhere to be found.

Only 25 years later in 1515, the German artist Albrecht Dürer produced this star chart, the first of its kind to be printed in Europe. Not only was the Big Dipper correctly represented, but twelve radiating lines at 30 degree intervals, corresponding to the twelve signs of the zodiac, helped position all 35 constellations depicted. So accurate was Dürer’s 1515 chart that it could actually be used to find the positions of stars.

Dürer’s chart was of such importance that Peter Apian (aka Petrus Apianus), a prominent 16th century mathematician, astronomer, and cartographer, copied much of it verbatim in his own star charts of 1540, shown above. While Apian added additional figures to his chart, such as a pack of three dogs to the right of Ursa Major, its chief feature was that it could be revolved to show how the sky would look at any date between 7,000 BCE to 7,000 CE. This was managed through 21 volvelles, which are a layered series of intricately produced paper discs which can be freely spun. The volvelles shown here move the North Star through roughly half of its 25,000 year precession, which is caused by a slight wobble in the earth as it spins on its axis.

Wilhelm Schickard’s star chart of 1623, above, was one of the first to employ a conical section in a celestial map. That being said, his simplistic chart lacked the zodiac and instead incorporated Biblical references for the constellations. In another chart published in 1655, he changed the Big Dipper into Elijah’s fiery chariot while transforming the constellation Perseus into King David by replacing Medusa’s severed head with the giant Goliath’s.

Lastly we have Johann Bode’s 1782 depiction of Ursa Major. Astronomy and scientific illustration had clearly advanced in 300 years. Derived from earlier charts, Bode’s detailed drawing included a classification of stellar magnitude based on the Greek alphabet. The precise system of coordinating lines that bisects the constellation located celestial objects relative to the Earth’s equator as if it were projected out to infinity.

All the images in this exhibit are facsimiles reproduced from books found in our Rare Books collection. For assistance in locating and using this material, please visit the Holden Reading Room or contact our ever-helpful Reference Staff.