On Monday, November 11th, 2013 the United States again celebrated Veteran’s Day. With this honored holiday in mind, we’d like to tell the story of a unique portion of one of our collections, the Julia Duggan Hart Papers, 1837-1970; specifically, the final folder in its final box.

Sadly, not every soldier’s story ends with his or her safe return to the United States. Such was often the case during World War I, and was certainly so for Julia Duggan Hart. Her son, Lt. Vernon Hart, served in France in 1918. He was slain along with many of his countrymen shortly after his arrival on the Western front. At that time, the U.S. military rarely returned the bodies of its fallen soldiers to their families back home. This ubiquitous obstacle led to the creation of American Gold Star Mothers, Inc.

Still in existence today, Gold Star Mothers is an organization dedicated to honoring all sons and daughters who have fallen while serving in the U.S. military. On May 28, 1918, President Wilson approved a suggestion made by the Women’s Committee of the Council of National Defenses that, instead of wearing traditional mourning for relatives who died in the service of their country, American women should wear a black band on their left arm adorned with a golden star for each family member who had given his life for the nation. In 1936, the organization’s impact had become so great that the U.S. government designated the final Sunday in September “Gold Star Mothers Day.”

Julia Duggan Hart, who was closely involved with organization’s creation, contributed the poem above to Gold Star Mothers in 1928, the same year the organization was formally established. Her connection with this group of other women was a close one, for years earlier she had engaged in a unique quest to both find and return her sons remains to his Texas home. That is the story revealed, document by document, in Mrs. Hart’s papers.

Julia’s search began through official channels. Lt. Hart’s uncle, Malone Duggan, was a Major in the U.S. Army. At Julia’s request, he asked for any information available about his nephew’s burial site. Lt. Hart’s unit chaplain replied with brief details and coordinates, as seen in the correspondence above. While interesting, the results of this search would evolve beyond a simple bureaucratic investigation and into the poignant tale of two mothers–one French, one American–and the relationship they shared with Lt. Hart, the bond that his death forged between them, and the grieving process of a mother whose child has been taken from her.

These two documents are a sample of the correspondence and accompanying translation (provided by the U.S. military) between Julia Duggan Hart and Thereze Collinot. Mrs. Collinot was a Frenchwoman at whose home Lt. Hart had lodged just prior to his departure for the front. He had become close friends with the Collinot family, who aside from his fellow soldiers were the last people to see Vernon alive. Mrs. Collinot became instrumental in the U.S. Army’s attempt to identify Vernon’s burial site. As a result of her involvement, Thereze and Julia began to correspond. One of their earliest exchanges, seen below, is the most incredible of this collection. 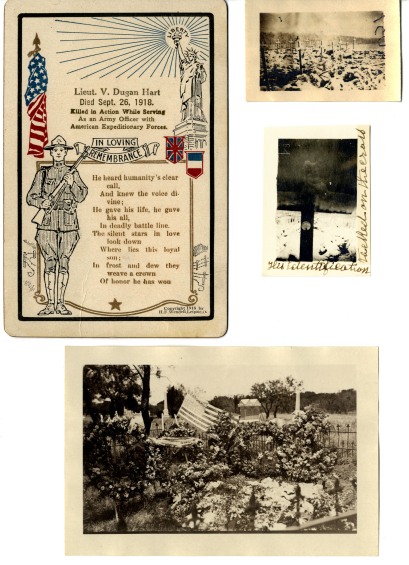 Julia Hart knew that she might never retrieve her son’s body. Recognizing this sentiment in their early letters, Thereze Collinot made a pilgrimage to Vernon’s grave. There she took two photos (top and middle left, above) of his gravesite. This simple gesture on Mrs. Collinot’s part created a bond between the two women that would be reflected in their correspondence throughout the ensuing years. Although they eventually moved beyond reminiscences about Vernon and began to share the intimacies of their own lives, Vernon always stood at the center of their relationship.  Through the efforts of the nascent Gold Star Mothers to prompt the government into returning the bodies of fallen soldiers to their families whenever possible, Mrs. Hart would eventually receive the bittersweet gift of burying her son in his home town of San Saba, Texas. The organization provided to her a gold star card (right) acknowledging his sacrifice. After his burial, Julia took a photo of her son’s grave, a duplicate of which she quite possibly included in her correspondence with Thereze.

It is difficult to convey the poignancy of this collection without viewing it in person, but we encourage those interested in doing so to contact our Reference Department to arrange a visit.