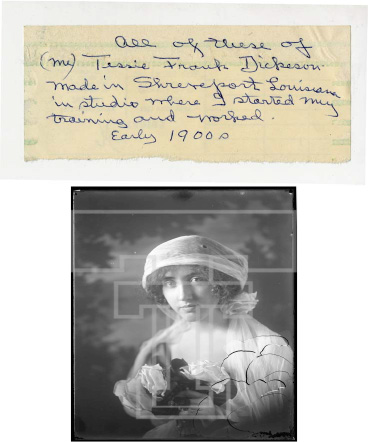 As Mrs. Dickeson tells it, she was a school dropout at the age of 13, after which she began work in a millinery shop in Longview, Texas, as an apprentice. She did not know how to sew and turned out to be a poor hatmaker, but she was a top-notch salesperson, so they kept her on at the shop until it went out of business. By 1947 she had moved to Lubbock, Texas, where she worked at Koen’s (photography) Studio, at last putting her brother’s camera and her love of photography to good use. The photo below is of her ready to hit the streets in the early 1900s to snap shots everywhere she could. 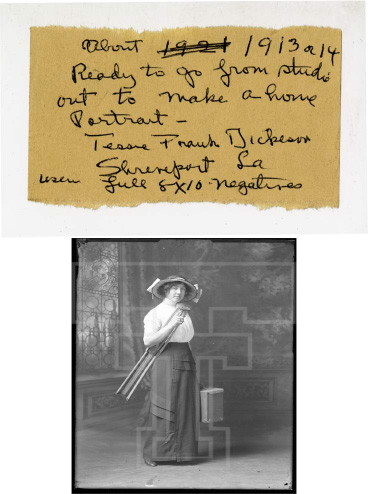 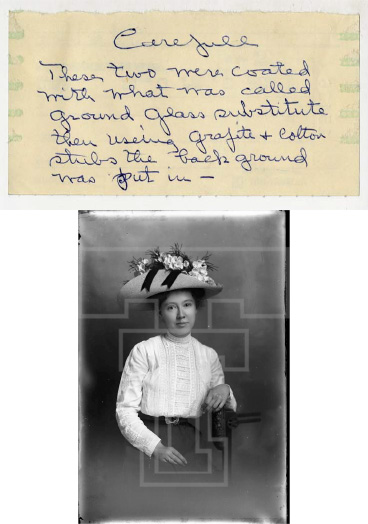 The collection is almost entirely glass negatives of photographs of people taken in Marshall, Texas, and Shreveport, Louisiana, in the early 1900’s, primarily from 1905 to 1918. Her labels explaining who the photographs depict are a rare bonus in a collection containing photos this old, but the real unique element is her narration of the process she used to develop the photographs. The photograph above, for example, shows not only an excellent hat, but came with her brief notes on the “ground glass substitute” coating, and the fact that the background was added after the photo was developed.

The photo above may not be the most flattering, but it also comes with a description of the dangers of working with glass plate negatives. We’re not surprised that some occasionally fell – when more than three or four of them are in a box, they are among some of the heaviest items we house at the Southwest Collection.

Once again, we encourage you to take a look at the rest of this unique journey into turn of the century photography over amongst our digital collections. It’s worth your time.