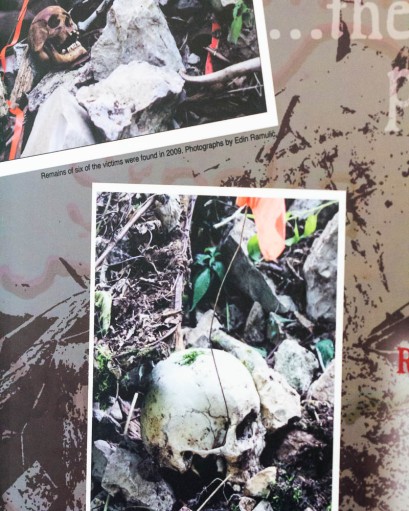 The image above is one of the many photographs displayed in the “Prijedor: Lives from the Bosnian Genocide” exhibit. This one depicts the remains of several victims of the genocide that were not discovered until over a decade later.

This October the Southwest Collection is proud to host the Texas Holocaust and Genocide Commission’s (THGC) thirty-four panel, “Prijedor: Lives from the Bosnian Genocide” exhibit. Through this exhibit, the THGC hopes to educate citizens about the circumstances that lead to the Bosnian Genocide.

Genocides begin when intolerant and hateful individuals dehumanize others in a society by putting them into separate and unequal classes and deliberately harming them. According to the Genocide Watch organization, genocides and mass murders led to the killing of more than 170 million people, more than the sum of the deaths in all 20th and 21st century wars combined. The exhibit, Prijedor, tells the story of genocide in the Bosnian city of Prijedor between 1992 and 1995. The exhibit honors both the memory of the lives lost in the Prijedor genocide and the experiences of the survivors whose stories are told within the 34 panel series.

The final panel of “Prijedor: Lives from the Bosnian Genocide” acknowledges the contributions of the residents of Prijedor whose donations of time, photos, and artifacts helped make the exhibit possible. More poignantly, it thanks the survivors whose stories the exhibit tells, often in their own words. Their names can be seen in the top-right.

The THGC’s mission is to increases awareness of genocide and the Holocaust through educational programs, advice, assistance, and coordination of groups, events, and volunteers. Chaja Verveer, THGC commissioner and a Holocaust survivor, says, “Our kids need to be taught to recognize and fight bigotry, to stem hatred and prejudice, and learn about living together, embracing diversity.”  The “Prijedor: Lives from the Bosnian Genocide” exhibit is open to all. College students, middle and high school students, and educators are particularly encouraged to attend. 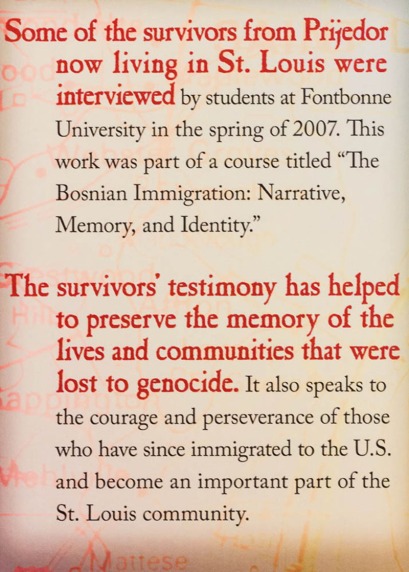 The text of “Prijedor: Lives from the Bosnian Genocide” is a narrative guided by the stories of the survivors. As you can see here, many of those survivors emigrated to St. Louis and later graciously made themselves available for oral history interviews so that this tragedy could be documented for all time.